Haruka wrote: I actually would like to see a return of the Knaaren in a future 3D Rayman game. They are part of my favourite things in Rayman 3.

I'd really like that too, but for another reason. I once had a "discussion" with someone (it might've been you, actually) about the lore on the Knaaren. Even to this day, it still doesn't make sense to me that Reflux (referred to as the Champion of the Knaaren, so supposedly the strongest Knaaren) is the only Knaaren that you can harm at all. But after you've defeated him, you simply left the caves of the Knaaren which left many questions unanswered. I would like them to return at some point so that their lore could be explored a bit more, as not much is really known about them. Maybe even a small spin-off?

I agree that they usually did a good job in building up a proper atmosphere for each level, but there's 2 tiny flaws for my personal taste:

1. The Longest Shortcut seems out of place. I don't know, I just get the feeling that this is a level that was thrown into the game just for the heck of it. Sure, it might be nice to have a moment to take a breath and take things easy in between all the fighting, but I feel like it doesn't really add anything to the game. If anything, it feels like a level like Fairy Council where you're supposed to get familiar with the game mechanics (so basically a less atmospheric version of FC).

I would like to point that during the first combat with Reflux the real target you have is his sceptre and not the body itself. What if invoking magic through it weakens the user a lot, making it more vulnerable as it consumes lots of energy?
Top

Well, you have to remember A. Most other Knaarens don't seem terribly bright, and might not even think to hit the scepter. B. Rayman has limbs he can fire like projectiles, making hitting the scepter much easier for him, and much more difficult for Reflux to avoid. If another Knaaren thought to go for the scepter, it'd be a lot more obvious, and given their size, easier to counter. Which brings us to C. Rayman is significantly smaller than Reflux, making it easier for him to weave between his attacks.

The_Real_Razorbeard wrote: If you haven' t already, I'd recommend looking up salShepherd on DeviantArt. They had a sort of alternate take on Rayman 3's story that branched off around the introduction of the Knaaren called 'Worlds Below.'

Ah yes, I remember indeed reading the first 2 pages of the Worlds Below comic, it actually got me hyped because they looked very good, shame he didn't do any other pages after that. Yeah, the description for them mentions that those were about as far as they got over that summer, despite expecting to have more free time to work on it. At this point the odds of it ever getting made properly are pretty low, but I'm hopeful that they'd be willing to at least divulge more details about what they had planned if asked. They're pretty busy with original projects at the moment, including one for their thesis, so if nothing else they'll be done with college in the not-too-distant future. Thinking I might try and get in touch with them about this whole thing tbh. I found their tumblr and they're much more active there than on DA.

I think one of the more interesting ideas they publicly displayed is that André would've joined up with you at some point, with a new look to boot: set me on fire by salShepherd

Which I find particularly tantalizing as a concept.

When the Grand Minimus says Knaaren are "invincible", he likely just means to you. Knaaren can harm other Knaaren.

So, as we all know, much of Rayman 3's music is dynamic in that it will change between different versions of sections of a track depending on what's happening in the game, especially during boss fights. Nowhere is this more apparent than in the final boss fight with Reflux. So, for fun, I decided to try and mix all the different movements of 'The Leptys' into a single track. It's a little rough around the edges, but I consider this more of a first draft. You can listen to it here:

EDIT: Working on the Second draft now. It's proving a bit tricky but I think it'll sound a lot better overall. 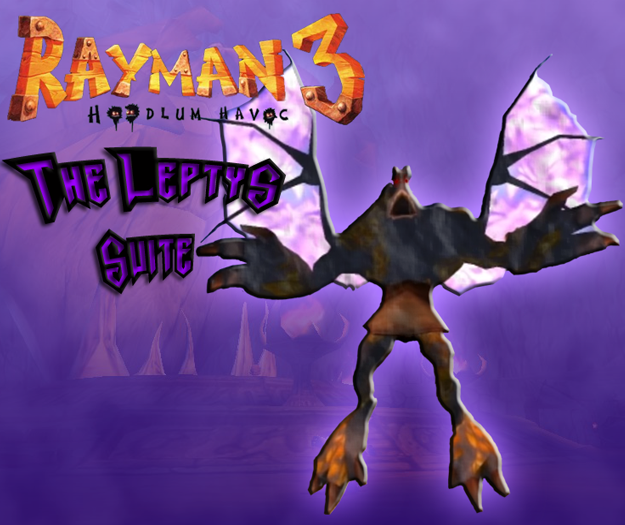 raymanrules77 wrote:Guys, i just picked up Rayman3 for the GameCube (PAL) and i'm wondering does anybody know how many blocks it takes to download the minigames from the GBA via link? It's important since i only got a couple blocks left on my memory card. I need to know soon because i'm about to order a new memory card.

None, no more space is taken by downloading the minigames.
Top

You know, I feel like I never really responded to the corrections made to my statements regarding Ancel's involvement in 3. The reason he was busy having been BG&E makes it a much easier pill to swallow, honestly. I haven't played the game myself, but even at a glance it's clear it had a very strong creative vision behind it, and I can respect that Ancel wanted to get a new concept out there rather than make another Rayman game. Sucks about Rabbids though, even if I kind of liked the first one, I'd much rather have gotten the weird costume-based action game Ancel was aiming for than what we got.

I recorded some nice quality game-play of Mad Trax and Wheelis mini-games from the GameCube version of Rayman 3.

Mad Trax: Wheelis: What do you guys think about these mini-games anyway? I'm really curious to know.
Top

How did you manage to do it? For years the community has been trying to emulate the GBA-GC connection (lagless) with no avail!
Top

Omg, thanks! I've always wanted to see a gameplay of those minigames! Thanks so much for showing it!

And I'm also wondering how you managed to do it. I've tried connecting the two emulators before without success.

It's quite easy to do with the right builds of VBA-M and Dolphin.
Top

Okay, so which builds are the right ones then?

This build of VBA-M, and the latest (either stable or dev, doesn't matter) build of Dolphin.
Top

Hm, well that's the exact same build I tried it on...

Hello guys (again), got a problem with my Rayman 3 for gamecube. Recently started to play again after a while and while attempting to load my saved game it said that no data was present on my memory card so i went and checked it on the gamecube menu screen and the icon with rayman was gone.
Has this happend to any of you guys? Because it has never happend to me before.
Guess i have to make a new save file and start over