For creating cleanup I will colloquially name the Rayman 3 PS2 demos.

Everyone knows this so I will move on.

This demo was first released a month after the premiere of Rayman 3 PS2 version but still has a lot of beta stuff.
-Some dialogues have been added especially in Special Invaders (some are different)
-The lock target image is different.
-Added new sounds and soundtrack
-Added Matuvu and Tribelle
-There are no hints (Platinium demo has them)
-Probably new voice actor for Globox (I'm not sure with this and other characters)
-After the end of the level appears Rayman 3 ad and the player is moved to the demo disc menu.
-New trailer at the beginning of the demo
-"Trailer" option was changed to "Options"
-Old loading screen

This demo was released in February or March (my version comes from March) but it's newer than American demo.
-Final voice actors
-Final lock target image
-Hints are back but different
-After the end of the level, appear two Rayman 3 ads and the player is moved to the demo disc menu.
-"Options" in the menu has only the control hint for Dangerous Game and no vibration function. These functions are available in levels.
-There is no Tribelle with Heavy Metal Fist at the beginning of the level
-6-minute time limit for both levels
-No trailer even after waiting in the menu or level
-After waiting without the action for 1 minute in levels or menu, appears the auto-played demo of Dangerous Game
-New loading screen

Auto played demo: Time's left effect: Bug:
Works only in Special Invaders. If the auto-played demo will be ended (by pressing a button) at the moment when Rayman has changed skin (by power-ups), can be achieved such a result: 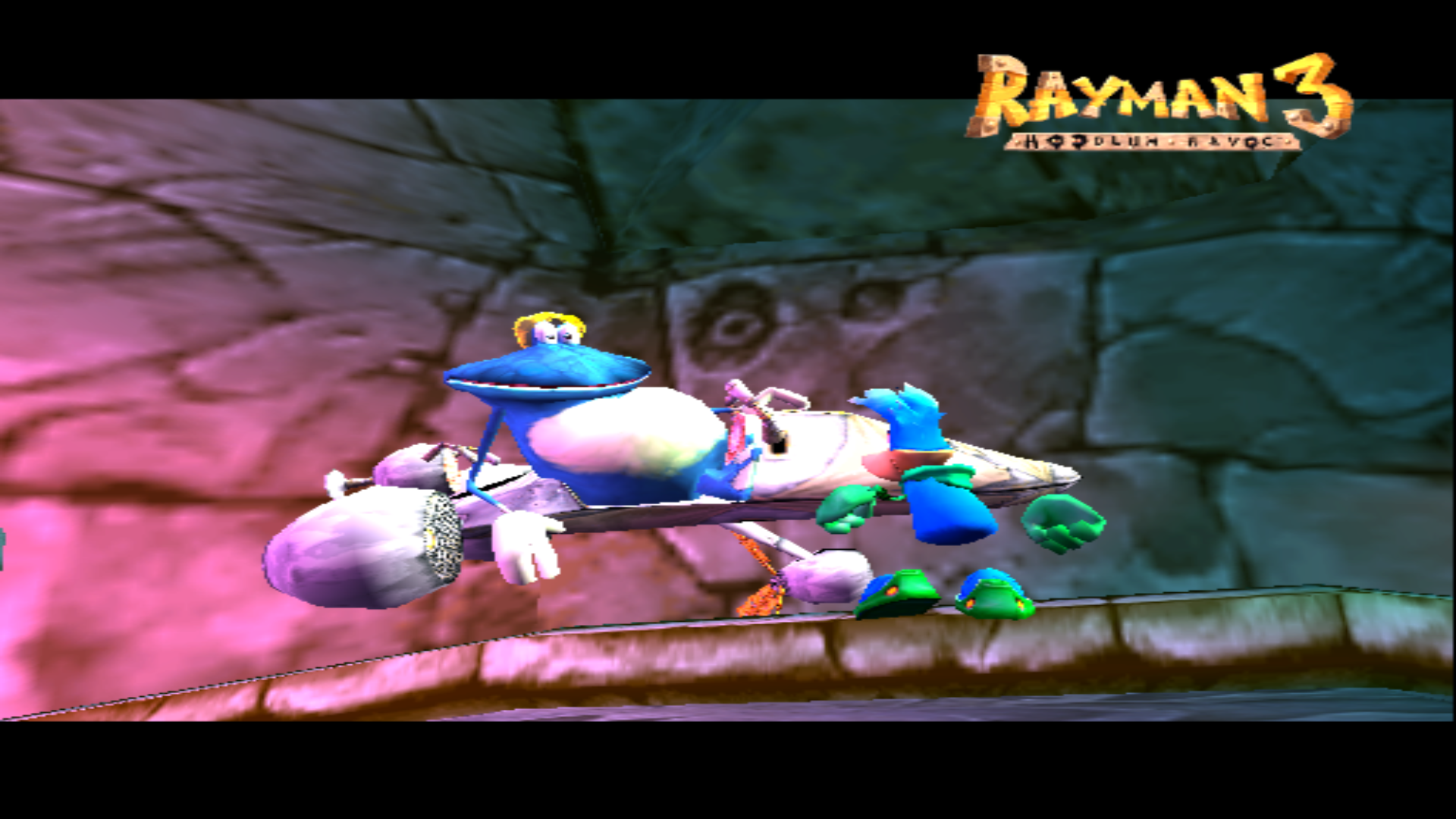 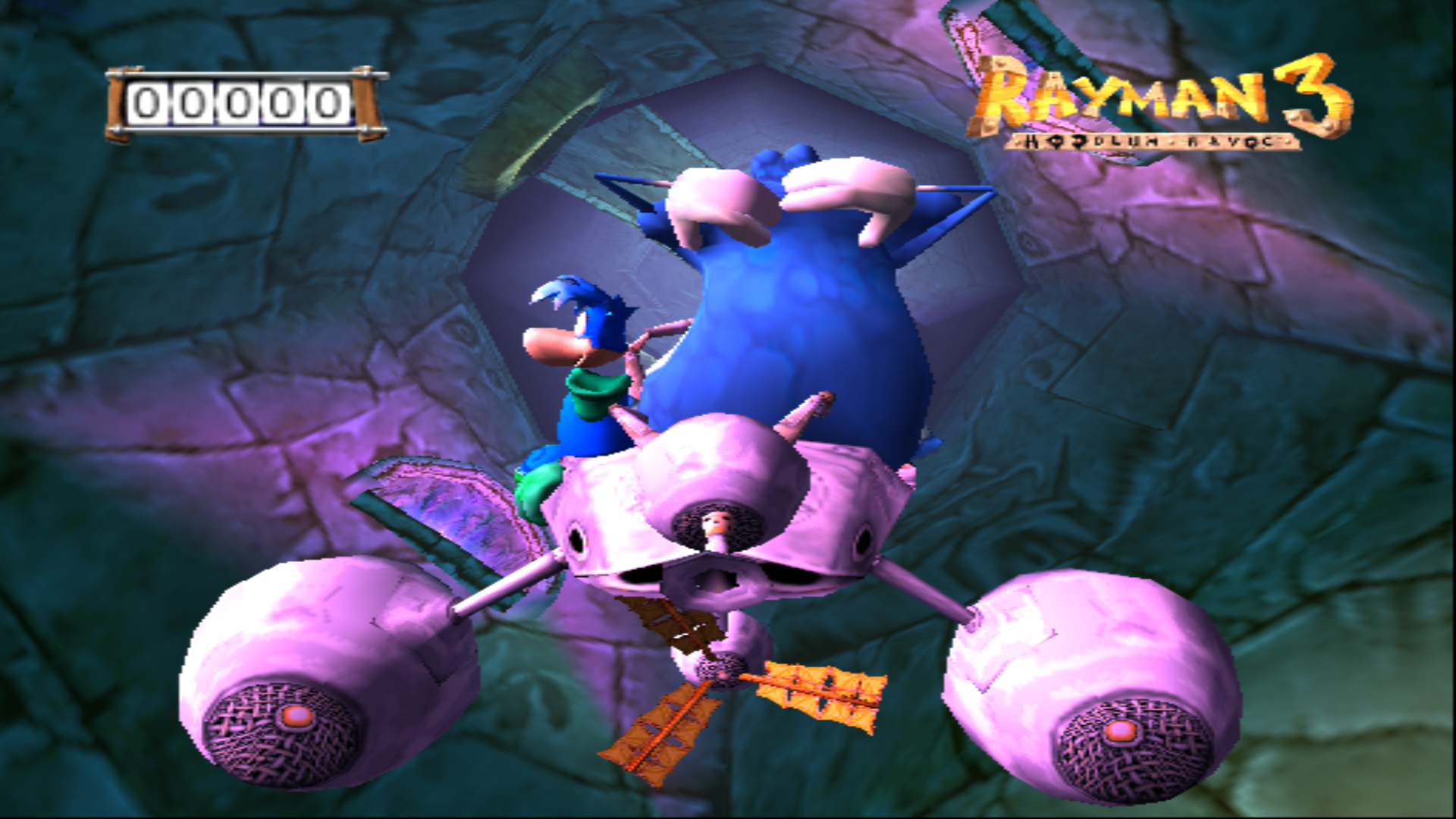 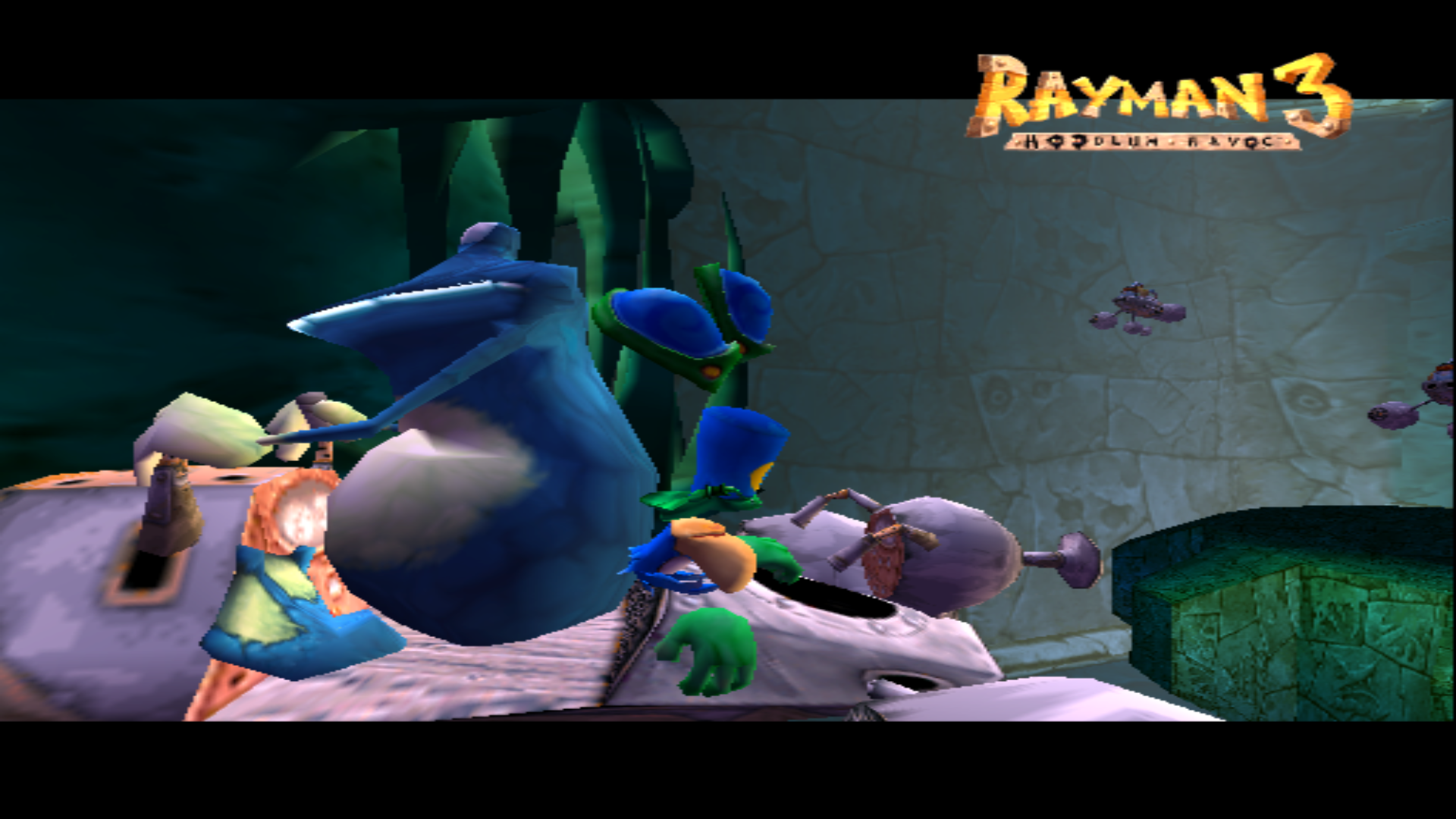 Looking at the content of the demo, it's possible to get this bug with Vortex, LockJaw and Shock Rocket.
Last edited by Nve on Mon Aug 20, 2018 12:30 pm, edited 3 times in total.
Top

I got this strange glitch/warning while playing Rayman 3 GC version. Curious...I thought only the PC version was possibly capable of it (then again I'm using an emulator

Also there's that possibility again that Bandicam could be interfering with it. The real console would never do that unless maybe the disc was badly damaged and even then, highly unlikely.
GLOBOX MOMENT!

Also there's that possibility again that Bandicam could be interfering with it. The real console would never do that unless maybe the disc was badly damaged and even then, highly unlikely.

Actually, this can happen on console, and with any version of Rayman 3. By holding Up or Left on the analog stick at the start of the level, Rayman will be able to move for a frame. By doing this, he will touch a glitched wall which will teleport Rayman out-of-bounds, triggering the message (the game quickly snaps Rayman back in bounds, however).
Top

RibShark wrote:Actually, this can happen on console, and with any version of Rayman 3. By holding Up or Left on the analog stick at the start of the level, Rayman will be able to move for a frame. By doing this, he will touch a glitched wall which will teleport Rayman out-of-bounds, triggering the message (the game quickly snaps Rayman back in bounds, however).

Huh, that's interesting. I've never seen it happen on Xbox having played a lot of it, but I have noticed that just before the cutscene to a level intro, if you spam the jump button you'll hear the jumping sound (even though it's a cutscene). It must be just because you can control Rayman earlier than the game was expecting, causing the undesired effects.

Well it's cool that it's been heard of then, I was just expecting it to be an emulator glitch bringing up some sort of game debugging error.
GLOBOX MOMENT!

Thanks Ribshark. I find it interesting that the stage I had that glitch is the same one that the video is set in. There are so many things in R3 that I want to discover...
Life happens. Just gotta roll with it!

I apologise for jumping to conclusions about it being the emulator, it's just that I've never experienced that particular issue before. I'll have to try replicate it next time I'm playing, though that may be a while since I'll want to finish R2 then play Origins first, despite losing a lot of progress by not backing up the save prior to reinstalling windows

Oh yikes that sucks. It’s ok that you thought that way emulators do have a habit for me anyway of causing a lot of unexplained errors. Best of luck with redoing the games though

I feel like going back to Rayman 3 in a couple of weeks and just trying to somewhat improve those levels I never bothered with then just submitting the score to the HoF. A legit score of well over 600k is enough for a guy like me that only started playing Rayman 3 less than a year ago. Not constantly either but just a few days at a time every so often.
GLOBOX MOMENT!

This. So much this.
I only noticed this post now and I really want to know more about the files in RAYMAN 3 HD, a lot of beta story and removed stuff from the hd port was posted on the Unlock Raythread by GOT4N but a lot of those images now are dead, I remember there being scrapped creatures like snails , crows and others, some infos about how the hoodlums brew their plums and other weird ass stuff which should definitely be saved.

By the way Nve great job with the demos really impressive!

I can extract all of the images from my PS3 version of the game again, but there's a lot of them. That's if the others don't visit anymore that previously ripped them and people want to see the images.
GLOBOX MOMENT!

From what I can see GOT4N doesn't post here anymore, but he definitely did an impressive job posting the unused texture, it would definitely be awesome if you could post them

they need to be archived because most of them were from creatures that were scrapped (like 4-5 iirc?), I remember that I still have a picture of the textures of a plum eating plant from Rayman 3

I'll look into it now. It might take a while because I remember most of them are flipped vertically, so I'll have to flip and save them one at a time. I'll also have to convert them as they're different file associations as far as I can remember. I'll convert them to PNG so they'll still have transparency effects.

Edit: There's some weird ones in there alright

I'm not sure if there's more to it than this but this is all of the ones I could get. I flipped over a lot of of these vertically because the majority of them were the wrong way, then I converted the .dds files to .png so they're easier to view there's over 2500 of them, some of which aren't really great but I just uploaded all of them: LINK

There's a lot of other files too but I just focused on the .dds ones for now. A few of them are likely still upside down, if so let me know. I flipped the majority of them which took me hours of going through them

EDIT: I'll convert them again tomorrow with something better because that dumb conversion program mustn't understand that PNG files have transparency

Whoah! You were really fast

Either way great job! Everything I remember is here including the scrapped creatures and other stuff, I'm going to examine some other folders later but this definitely has a huge amount of scrapped content, I wonder why it's only present in the HD version, maybe it's an earlier build.. hmmm

The Rayman 1 image used on the Teensie Highway is from Rayman Advance too for some reason instead of the original, I noticed when looking through them.

But yeah there is a lot of unused stuff. I'll check if I can use a better converter later since I'm almost sure that one atdded black borders to a lot of the images for some reason.
GLOBOX MOMENT!

Wow, there's a lot of stuff. It would be good to sort this someday.

EDIT: hey, there's even stuff from the unpublic demo and other.

Another thing I found interesting is that there's a few Rayman 1 sprites in there that look like they were remastering them, like the Picture City pens, pencils and drawing pins.
GLOBOX MOMENT!

Steo wrote:Another thing I found interesting is that there's a few Rayman 1 sprites in there that look like they were remastering them, like the Picture City pens, pencils and drawing pins.

Those are from 2d nightmare, a minigame you can only unlock in the gamecube version

The problem is that for years only a picture from Raymanzone existed but various years later it was discovered that it was actually inside the game and the method to unlock it was just broken, but you can play it with cheat codes.

Oh yeah that's right I heard something about that before. It's weird how all the GameCube stuff was left in the game. It even has a ubi.ini just like the PC version:

So if that's right, it runs in 16-bit then? It also still contains Rayman Arena in the ini file, again just like the PC.
GLOBOX MOMENT!