by PluMGMK
Did she ever give any indication as to why she wouldn't be in that post anymore?

PluMGMK wrote:Did she ever give any indication as to why she wouldn't be in that post anymore?

I'm new here and this is my first post.

After being more than a year without playing Rayman Adventures, because of a stupid bug that corrupted my save file, I finally got the courage to start all over again.

I was on adventure 272 with 173 Incrediballs (all of them at the time...), so this decision wasn't easy. However, my love for this game spoke louder and I couldn't stay any longer without playing.

That being said, now I need some help. I play on Android and could use some friends. I don't know anyone that plays this game. On the other save file I had some random friends that sent me friend requests... but I don't even know how it worked because they were not on my facebook. But now, of course, they're gone.

But, anyway, I'm not here just to ask for help. I've been following this thread for ages and I think that it's time to get to know you guys.

by PluMGMK
Well, I don't play Adventures so I'm afraid I can't help you on the friends front, but I would like to welcome you to this fine community!

by RayCarrot
Hey and welcome! Your situation is actually almost identical to mine (corrupted save, lost a lot of friends etc.) with the only difference being that you're on android and me on iOS. Because of that I won't be able to add you as a friend. The requests you used to get were probably from the leaderboards where players could previously send each other friend requests. That has however been removed since then. The only option to get friends now is through Facebook or Google Play Games/Gamecenter.

by WhiteRing
I also noticed that they removed the Twitter integration, at least on android. Is it still available on iOS?

Now I also lost all the "event exclusive" Incrediballs. The RayWiki says it's possible to get them on golden tickets, but that must be ultra rare. Anyone here ever had such luck?

I'll explain better what happened to me, even if it's just to clear my mind.

My bug came with last year's Summer Update that took ages to launch on Android... and it was better if it had not been released at all. The game started saying that I was back on Adventure 1 and stopped saving my progress. Tried everything and the Ubisoft support didn't help. Some updates later, which didn't solve problem, I was trying once again a workaround and ended up messing up the game even more. I think that the game somehow let me do something that shouldn't be possible to be done, like getting the egg without the levels being cleared, and that corrupted the save. Now that save file only works without internet connection. As soon as it tries to synchronize with the server, it gives an error because the data doesn't add up. Is a case to say that the cure was worse than the disease. Nonetheless, that save file was ruined either way.

After a lot of back and forth with the Ubisoft support, I came to the conclusion that the only thing to do was create a new save file and start everything from the beginning. The worst part about all of this is that I've lost confidence in this game and now I'm always afraid of losing everything again. But as long as no other Rayman comes out for consoles, this is all we have with some kind of new content.

I'm sorry for this huge testament that I just wrote... and any spelling mistake since English is not my mother tongue.

WhiteRing wrote:I also noticed that they removed the Twitter integration, at least on android. Is it still available on iOS?

Oddly enough it's still available on iOS. No idea why it was removed on android.


WhiteRing wrote: Now I also lost all the "event exclusive" Incrediballs. The RayWiki says it's possible to get them on golden tickets, but that must be ultra rare. Anyone here ever had such luck?

I think I wrote that because when you go to the tree and press the info button for the Incrediball family it says, for the seasonal ones, that they can be obtained from Golden Lucky Tickets. Now, it's actually never happened for me either, so it's probably quite rare. I believe there are packs you can purchase which gives you these Incrediballs, so they probably want to get the players to buy those instead.


WhiteRing wrote: I'll explain better what happened to me, even if it's just to clear my mind.
[...]

Hm, seems like the summer update had some serious bugs then since that's when I lost my progress as well. For me it was because I had to close down the game during the in-game update. When I re-opened it I was back on adventure 1 (even though it said adventure 7xx on my save file). I was connected to both Facebook and GameCenter, but that only synced my new "adventure 1" progress. I tried restoring an old phone backup with an old save, and that worked at first. But just like for you it only worked offline. As fast I turned on my internet again it would sync my "adventure 1" progress. I was in contact with the support for half a year after that with them presumably contacting the developers who "couldn't do anything to fix it" (yeah, really...). They then said they could possibly restore some items if I sent screenshots as proof, and since then they've just ignored me and closed my case whenever I reopen it... Yeah, I've lost all confidence in the game and I've only played so that I've had all worlds unlocked again. I used to have all Incrediballs, but I just don't feel the incentive to do all that again (especially if I'll loose all my progress again...).

by WhiteRing
Our cases are very similar indeed. My save file also had the correct information.

When the summer update came out, the internet was flooded with complaints and they never did anything to solve the problem. They even abandoned the Facebook page because almost all the comments were negative (at least that's what I think that happened...). Now that everyone who had the problem has given up and the dust has settled, they started using it again. Coincidence, of course.

My only incentive to play is that I have a new phone and everything looks better and is MUCH faster than in the old one, so it's like I'm playing a remastered version

After much insistence, they gave me what they called a "compensation pack" the other day. What was it? 1500 gems, a couple of lucky tickets and some speed elixirs. Wohooo!!! That will be enough to buy one of the cheapest costumes! Conclusion: don't worry, it isn't worth the time and patience.


I think I wrote that because when you go to the tree and press the info button for the Incrediball family it says, for the seasonal ones, that they can be obtained from Golden Lucky Tickets. Now, it's actually never happened for me either, so it's probably quite rare. I believe there are packs you can purchase which gives you these Incrediballs, so they probably want to get the players to buy those instead.

That or maybe we have to get all the other Incrediballs first. Now that there's no duplicate Incrediballs, I imagine that when we get an egg on a lucky ticket, it has to be a seasonal one because we have all the others. It's just an idea... probably wrong.

by RayCarrot
Well, according to a new post on Facebook by the Rayman page, the enemies we titled Swordsman Ninja are in fact called that. I do however wonder if they just saw that name on the wiki and used it for the post...

by PluMGMK
I consider that to be a likely explanation.

by RayCarrot
Yeah, especially considering they named the Lividstones "Livingstone" (which the title for the RayWiki page...).

That sounds odd in my opinion.

by PluMGMK
"Livingstone" was a nice witty name for the explorers, since they did appear to be, well, living stones. Then in Origins, they got this idea to try and tie all the previous games together, which involved putting all the nightmares in the Land of the Livid Dead. Changing the explorers' name to reflect that is probably one of those "sounded good at the time" things, but it's not really that compelling.
Of course, don't get me started on what they did to the Land itself…

by Master
I remember someone coming up with a nice theory in regards to the Land of the Livid Dead. The Rayman 3 variant was a sort of heavenly overworld, while the UbiArt was meant to be a hellish underworld.

A new update just came out with a new limited time event! 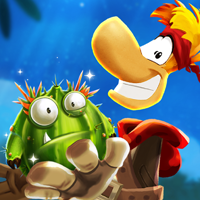 "The celebrations continue!
Get ready to spin as we introduce our all new limited time event, the FIESTA WHEEL! Spin the Captain’s wheel to get epic challenges, and the chance to win Fiery Chillies! Exchange your chillies for Nacho Tickets, Maracas Eggs and an exclusive ‘Glombrero’ Costume!
Try your luck at re-uniting our new event-exclusive families, ‘THE LUCHADORS’ and ‘THE POKIES’!
Hurry, update your game today and add a fun spin to your day!"

The "Glombrero" costume is this one... which I'll probably never get: 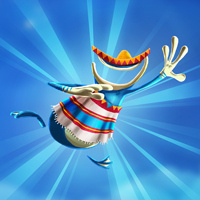 I only had the chance to participate in the first event, the Easter one with the "Bon'Bons" and I found it very cool but, at the same time, VERY stressful.

Since then, Ubisoft has been focusing a lot on this kind of events, probably because it forces us to play as much as we can every day, so we can get all the exclusive stuff before the event ends. I, personally, prefer to play at my own pace without this kind of pressure... but I'll try to get everything, anyway.

What do you think of this limited time events?

by Hunchman801
Captain’s wheel? How do I get to use it?

by RayCarrot
It's in the event menu. You can spin it every 6 hours to get to play level where you get the chilies (the event currency). It's basically like past events, though you spin a wheel and play levels instead of defeating Rabbids.

by Sabertooth
This event is way better than past ones because, instead of mindlessly tapping on the screen in the same places repetitiously to get items, you just play levels and get rewarded with them. You can even restart the wheel without waiting if you spend 20 gems, which isn't much, especially since there's nothing else to spend them on. For the first time since Globeach I think I'll get all the stuff.

by Ray502
Hmm, I have updated to the latest version, but I haven't tried it out yet. Sounds interesting so I should start it up again to check it out.

by RayCarrot
After having replayed the game now I noticed that the previously event exclusive Incrediballs can now be obtained normally. Can anyone confirm if this is the case for everyone, or only for players who installed the game after prior events?
All times are UTC+01:00
Page 95 of 99