A few posts back, I put an interview with Ancel where he says there'll be 6 regions in the game. We were already told that there will be 60+ levels in 12 different environments, but now we also have 6 regions. I found an article that says they were told new information including that there are 7 worlds in the game. That means that in every world there will be between 8 and 10 levels, and in every environment (e.g. ice, food, jungle etc.) there will be 5 levels. Here's the article-
http://electronictheatre.co.uk/index.ph ... s-revealed
Top

Dont know if this was posted already so... 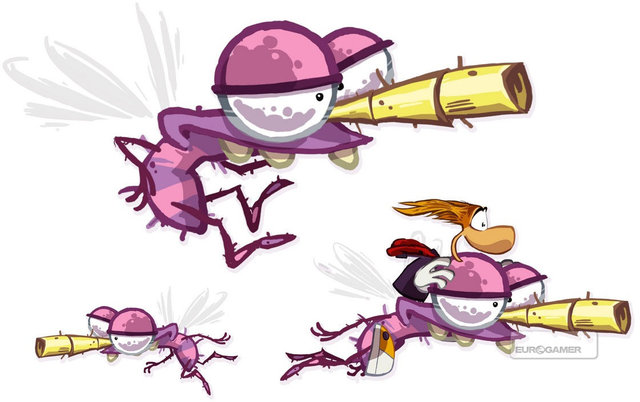 What have they done to Moskito?!?

Moskito was redisigned in Rayman Origins. Oddly he possesses a mouth now, when I always thought that the proboscis was his mouth since the beggining.
Top

Do you guys remember of RO being nominated by IGN to be a candidate of the Best Platformer in E3 2011? Rayman Origins got the award

Moskito looks awesome, they kinda got the quality of the original and then creatively spliced him with a pig. Incredibly psyched that the entire game is hand drawn.
{he'll have to get me first!}

What have they done to Moskito?!?

Are they REALLY teeth? That doesn't look like a mouth at all. If it is a mouth, then it looks completely retarded.

They've also managed to make the flying grab rings look equally ridiculous by giving them goofy faces and also giving them hands. Seriously, did they forget that Rayman has a fist? Some things are better left as they are.
Top

And isnt this Razorbear wife?
Sorry if repost. 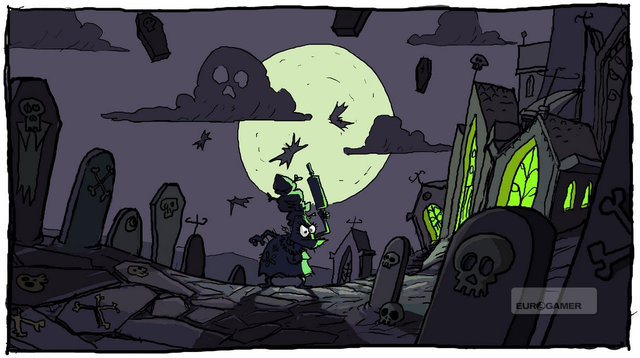 Jesus, it's just a mouth

Razorwife...maybe! You know, I coulda sworn that Razorbeards hat was on the cover, though originally I thought that, with the rolling pin, it might be space mama...
{he'll have to get me first!}

I don't believe, despite of being similar.

Alas, she is named as "Granny" here.
Top

Apparently my name was brought up a page ago? Ive distanced myself from any community that isnt neogaf since like a year ago so i cant imagine when i brought anyone here to anyones attention. Certainly not recently.


Anyways ive been in france the past week for the annecy animation festival and you know what I do when i get some downtime with wifi? I watch Rayman Origins E3 footage, especially dat trailer.
Oh my god you guys. /you guys/ Game of the show right here.
Ancel was pretty adorable during the showing at the conference (I love when he puts his hands to his ear right before the tetris music kicks in!!) and the game looked super sweet. That trailer though, man it sums up why im so excited for this game.

Lavish and gorgeous handdrawn 2D graphics, fast paced atheltic platforming and traversal, cool uses of co-op (I love games where you can use other players as stepping stones for platforming! I think Jazz jackrabbit 2 did it first), high octane energy, and this game had the most distinct personality. Mario 3ds WISHES its trailer music was as good as the bluegrass twang meets bombastic orchestra present in Rayman's.

Im really glad this game won Igns platformer of the show, it really deserved it. You can see the love and care in making a gosh darn fun as hell platformer in every frame of footage. Its fantastic, im unbelievably hyped.

(as far as rabbid games go, alive and kicking looks like the best party game on kinect but im very meh on it. Much more interested in their spiritual successor Killer Freaks from Outer Space)

Edit- looking through more old posts, glad im not the only one to catch the cocktail glacier reference! Also re: "concrete", I always assumed that Ancel was referring to how "gamey" Rayman 3 was. Its the most arcadey Rayman platformer with its emphasis on replaying stages for better scores, the powerups, and combat focus. I dont think Rayman Origins is really in the same league as far as that goes, but its certainly the least cinematic-driven of Ancels
Post-R1 games. I do find it kind of funny that Ancel makes these very cinematic games but you look at games made by people formerly under him (Rayman 3, Tork, Raving Rabbids the 6 month dev cycle minigames version, Rabbids Go Home) and theyre all score-based more arcadey experiences. Its also a little funny that this E3 has the inverse of that (Rayman Origins compared to Tintin and Killer Freaks)
Top

Paradigm wrote:They've also managed to make the flying grab rings look equally ridiculous by giving them goofy faces and also giving them hands. Seriously, did they forget that Rayman has a fist? Some things are better left as they are.

They've got to think of Globox and the Teensies as well as Rayman.

I agree with you, though I don't like the idea.


Paradigm wrote:They've also managed to make the flying grab rings look equally ridiculous by giving them goofy faces and also giving them hands. Seriously, did they forget that Rayman has a fist? Some things are better left as they are.

Yeah, doesn't that actually prove Rayman doesn't have a fist?! I like the new design, but you're right, they probably did it because of the lack of a telescopic fist. If Rayman can have a fist, and the others are supposed to have the same powers, then how the hell are they going to implement it? Surely they can't use the magic fist from R2 because I read an article which says there's only one attack button, and we've already seen what that button does.

Edit: I noticed they changed the color of the hunters missiles from green to red-

iambored2006 wrote:
Edit: I noticed they changed the color of the hunters missiles from green to red-

I believe that the Hunters haven't just one kind of missle anymore.
Top

I think it's just different missiles.
The second may not belong to the hunters.

Henchman800 wrote:I think it's just different missiles.
The second may not belong to the hunters.

I agree with you that it may be different missiles, but the second one is a hunter's (watch the end of this- http://e3.gamespot.com/video/6318803/)
Top

K.NARREN wrote:Double post because I've just realised who you are

Lijik brought you up to me a while ago


I am aware that many Crash Bandicoot fans disagree with me about Twinsanity; perhaps this has something to do with the fact that I formed my own views independently, without being influenced by HP Zoner’s glowing review on Crash Mania or his very negative review of The Wrath of Cortex (a game which I thought was a step in the right direction for the series, despite its lack of creativity; at least it still felt like a proper Crash Bandicoot game).

Yeah, you're that guy who considers himself to be the gold standard. I'd like you to know that I remember this quote from crash mania, and I remember feeling very angry at the time. I loved Twinsanity long before CM or HP- it's how HP and I got to talking and became friends. The influence you claim he puts upon others opinions is only what I've seen you try to do here today, and I shall do it myself right now :V

Because you obviously have no taste in games, if you think wrath of cortex was a great game you're naturally love R2. WOC also failed to do anything innovative or new with anything in particular while Twinsanity attempted to show us a side of crash we had never seen before. And guess what, I used my own brain to come up with the opinion. I also used my own brain to figure out that you're a bigger douchebag than me. How did yours cope with that?

EDIT: If I fail at R2, why do most others I know experience the same problem?

As a (former) Crash fan, I will admit straight away that I didn't like any of the games after Warped. However, given the choice, I'd say that Wrath of Cortex is still the best game out of all the post-Naughty Dog titles, because it's the most traditional. The first two games are the best though, by a landslide. For now, I've lost all interest in the franchise, because they've completely and utterly ruined it. I know some people disagree and believe that things should evolve, they should move with the times etc, but Crash is yet another franchise which needs some kind of 'return-to-roots' game to save it. Rayman has done it, Oddworld are on the verge of doing it, so why not Crash as well?
Top

Gameinformer made a preview video:

I'm sorry, but you have got to be joking.

Wratch of cortex was a carbon copy of the original games- but not even a good carbon copy! I don't mind if the games go back to the series roots, but only if they're good! WOC had shitty controls, a terrible physics engine that even ND managed better on the damn PS1 and a woefully bland design structure. Twinsanity not only paid homage to the original trilogy, but also involved better gameplay mechanics and a more interesting open world experience. Even before talking with the dev team on that game, I loved it from the get go and so did fans of the series. Critics cited it as the funniest game in the series and it's only really let down by its length. Considering the team lost all of their data over two years and had to build the game from scratch, they did a damn good job. I hoped it would mean the next game would be the same, but bigger and better.

instead we got Crash of the titans which went the WOC route of giving us half hearted gameplay, only now with a forced gimmick that really didn't benefit the series.

You have to innovate, but that doesn't mean 'completely change something.' Rayman 3 tried combat and it wasn't bad. Not perfect, but not bad, and the scoring system made for replyability.

Rayman origins also innovates within the series. It takes the ideas from the first game and revs it up, trying new gameplay and design mechanics. Is this a bad thing? No, it puts good artists in a paying job so they can continue to work on hand drawn projects in the future, and it brings yet another audience into Rayman without destroying what made the original so good in the first place.

I mean, if you really hate new things that bad, go and stay in the past and play the same games over and over again. Even better, just stick with Nintendo. They've been putting out the same crap with different names over and over for the last two decades :V
{he'll have to get me first!}

Tmsp95 wrote:Every Rayman game had that fantasy and colorfull sence in every stage, it is just diffrent in every game. 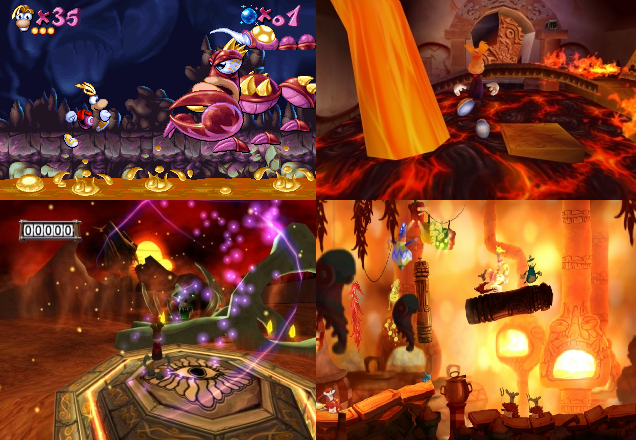 Sorry I'm a bit late in asking this but could you change the R3 pic to be instead of Hoodlum Headquarters? It'll make this perfect, with every picture depicting lava (or fire...)!
btw, I'm getting a PS1 tomorrow with R1 and 2 for my birthday! I'm so happy I'll get to play these games again!!

Seriously K.NARREN you are the most obnoxiously arrogant, self-important person who has absolutely little to no respect for anyone else's opinion- do you really feel the urge to fly into full paragraphed tirade every time someone has a different opinion to you? Its honestly quite childish. If you don't agree (especially with the whole not liking R2 thing, which is practically trolling everyone on this forum) just make your point without insult and move the hell on.

Seriously this is all I see in you:

...I know my apprehensions might never be allayed... and so I close, realizing that perhaps the ending, has not yet, been written.
Top
Post Reply
16951 posts