Discuss tools to aid in the modification and running of Rayman games.

Your browser and anti-virus may detect RayTwol.exe as unsafe (I think it has something to do with highly-amused.com being a newly-registered domain); ignore and bypass this.

RayTwol checks for updates and automatically downloads them when launched, so don't worry about having to check in and re-download it every time!

Please report any bugs or crashes, and thoroughly examine the help window!

This could be really cool though, if it got figured out to the point of something like, say, Toad's Tool for SM64 editing. I can see it now: Kaizo Rayman 2

Or you know, actually good stuff. That too.

It's nice to see more people working on Rayman 2. Do you use GPT files for finding out entities or do you scan for the strings in the SNA file? I'd be happy to help.
Good morning, that's a nice Tnetennba.
Top

Greeness wrote:Amazing as always Ad. the object editor is for the pc version of the game?


The_Real_Razorbeard wrote:This could be really cool though, if it got figured out to the point of something like, say, Toad's Tool for SM64 editing.

I think TT64 has an awful interface, so I'd definitely want to aim higher than that.

szymski wrote:It's nice to see more people working on Rayman 2. Do you use GPT files for finding out entities or do you scan for the strings in the SNA file? I'd be happy to help.

I spent a while looking in the SNA for patterns surrounding the objects, and I found that all of them begin and end as such:

As for the GPT files, I've played around with those a bit, but in no great depth. Those are the files I was talking about earlier that seem to hold some animation and model-child information and such. Basically, what I've done, is I went through and filled in as much of the file as I could with 00's (pretty much 99% of it), and it would result in this: http://www.mediafire.com/file/dumxv2bcb ... .13.04.mp4

It's awesome to see that you've looked into the GPT files, since I didn't really have any idea what I was doing when I was messing with them. I've only been programming for a year and a half and I'm not much of a reverse-engineerer, so I would be over the moon if you were interested in helping out. The first thing on my plate is to try and find the objects' coordinates. Incidentally, I'm using your moonjump hack tool as a guide, since it displays Rayman's coordinates: When Rayman jumps on a bouncy mushroom, he of course locks to the X and Y coordinates of the mushroom.
Top

Updated the first post - a new version is available, and manual decryption is no longer necessary; all the levels can be opened immediately!
Top

Not really well versed in model editing, but will this allow for level geometry to be previewed as well?

It will. I'm actually building a 3D API and engine from the ground up for it (it's not based off of OpenGL or DirectX or anything): 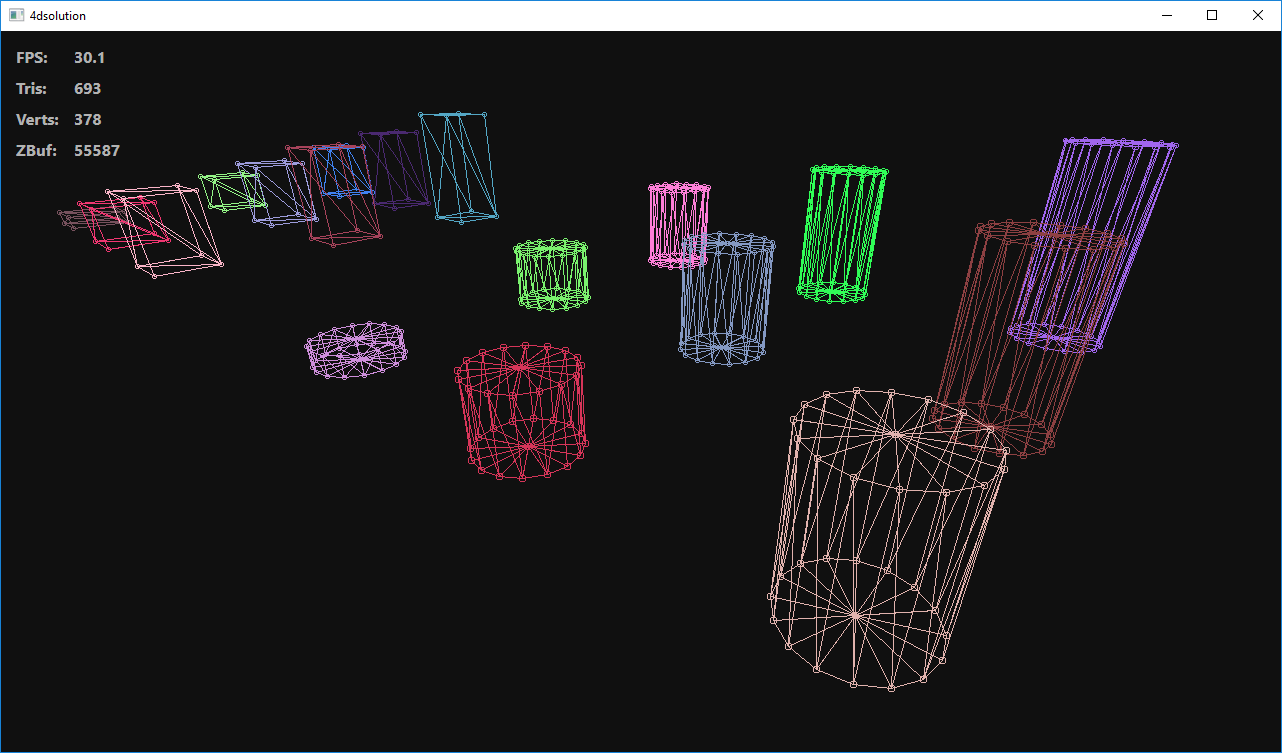 As it's entirely my own API, the program is only 30 kB right now, and it opens instantly with no loading times. The performance at the moment is extremely sub-par, as it's running on the CPU, and only on a single thread. To improve performance, I'm going to try multithreading, and if that isn't sufficient, I'll figure out how to program for the GPU. Really, for now I only need it to be efficient enough to render out a Rayman 2 map, which I'm guessing is under 10,000 polys.
Top

You somehow something demoscene like, we'll see what the program will look like when it's size will reach 64 kb.

Neat, I've always wanted to see whether the first part of the Fairy Glade actually did make sense, or if they had the area with the machine directly beneath the starting area.

Master wrote:Neat, I've always wanted to see whether the first part of the Fairy Glade actually did make sense, or if they had the area with the machine directly beneath the starting area.

The machine part is besides the starting area, not beneath it.
Top

Well, this is crazy

! Good luck with this, I will want to see any future attempts of creating anything new.
Top

Big update: I've remade the interface in WPF, and I've implemented my engine into it. Now you can see all (or most of) the objects in a level in a 3D viewport. Each one is only represented by cubes for the time being, but it's more than likely that some major progress will be made very soon regarding the models (thanks to Szymekk). Here are the three areas in The Precipice: 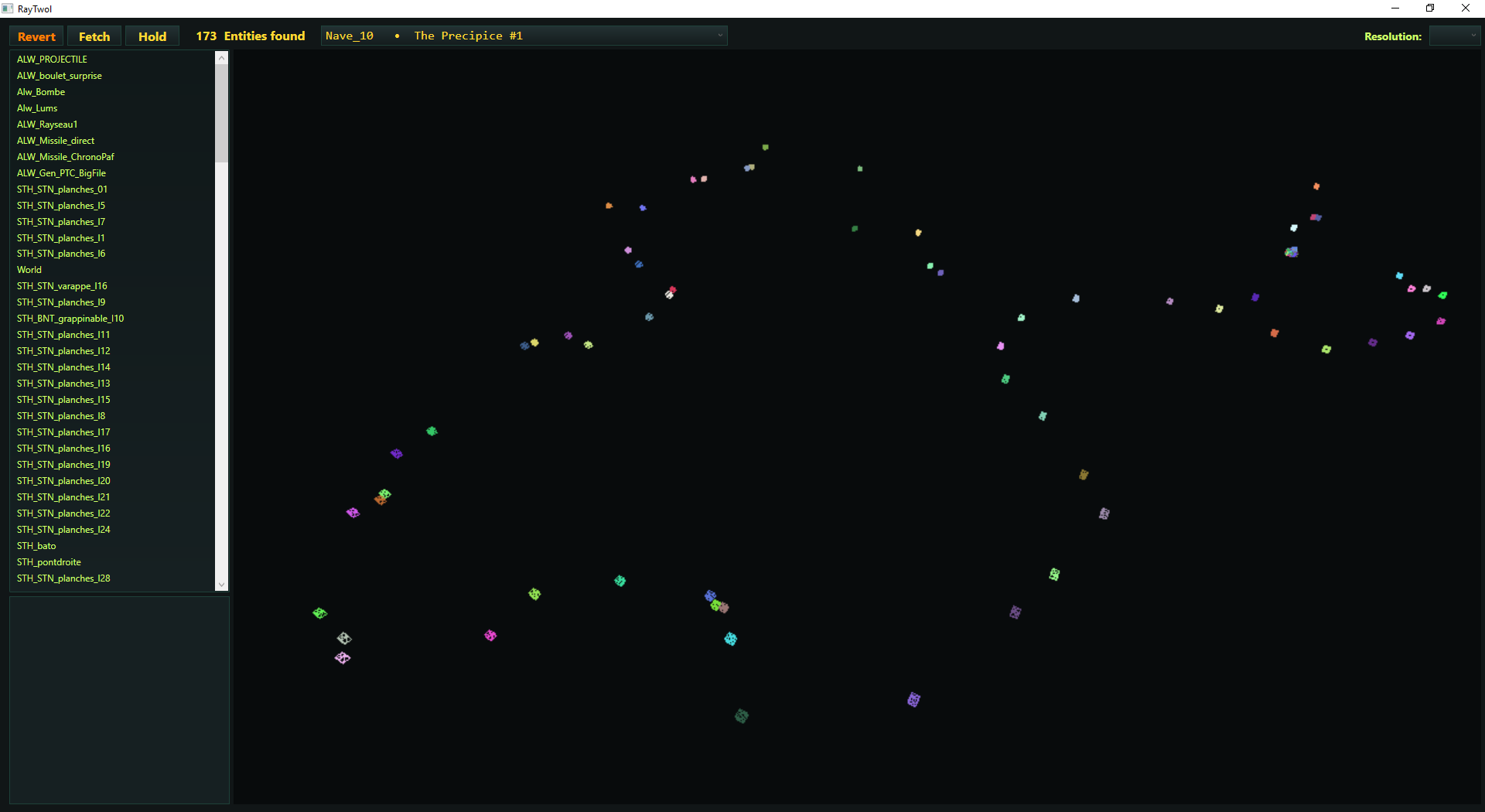 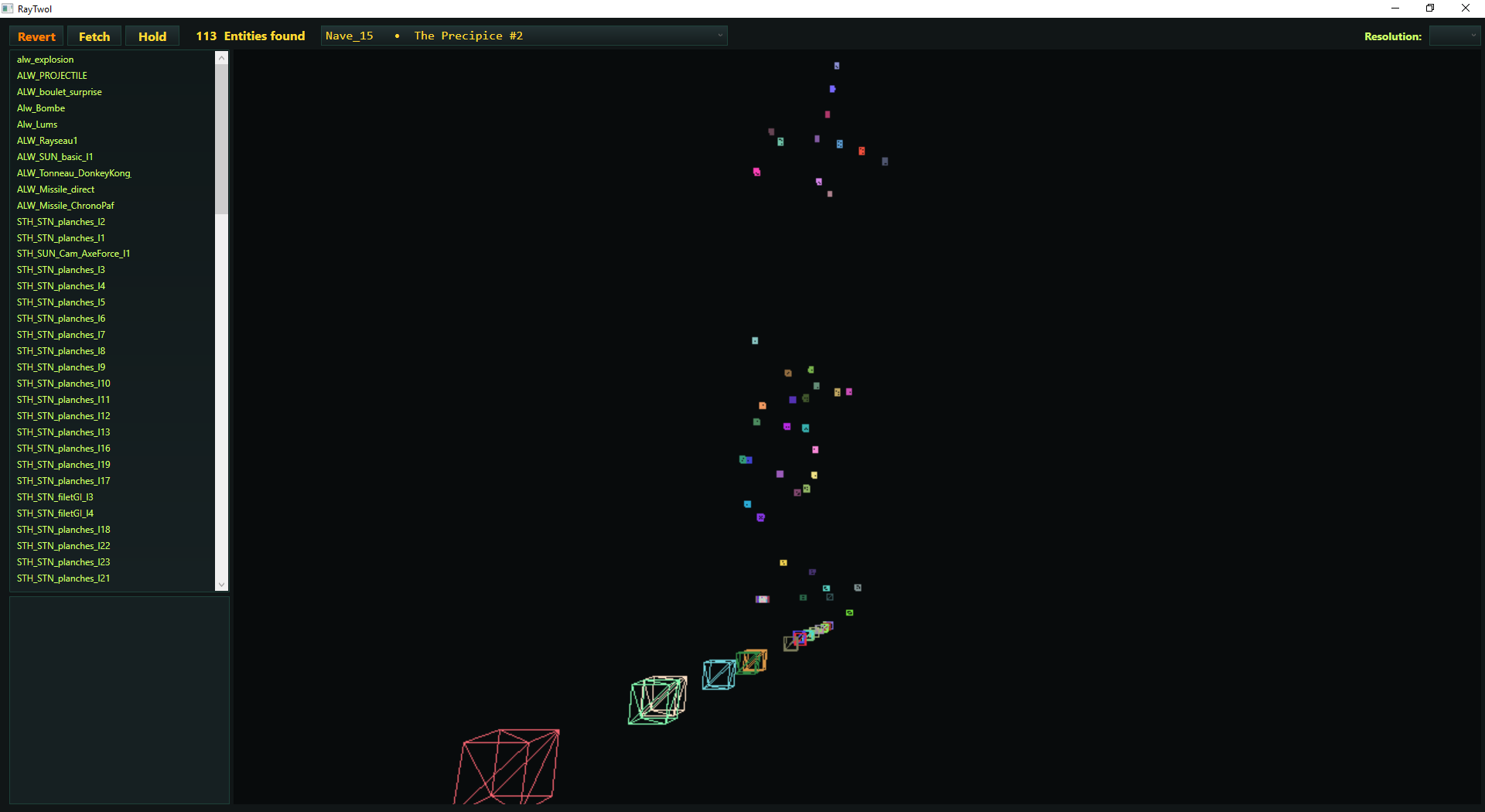 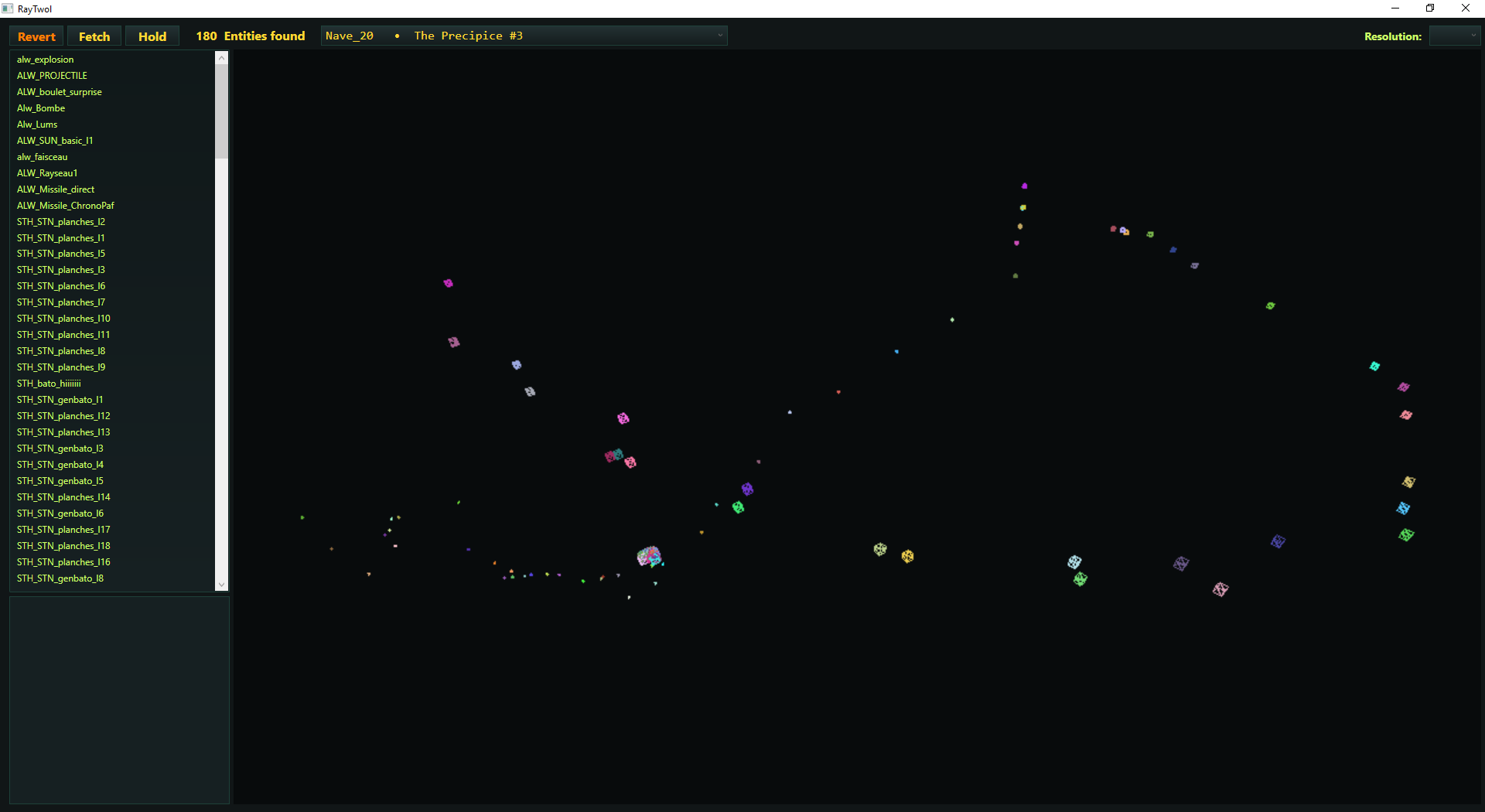 No release quite yet unfortunately, as I need to fix some crashing issues first. Expect something in a day or two.
Top

I've updated the first post with information and a download for the third build. Please report any bugs or crashes if discovered.
Top

"yay, Rayman 2 editor, finally!" *instantly downloads*
*opens the editor* "The Rayman 2 directory hasn't been selected"
"oh, k, i'll just select it and..."
*realizes that he uninstalled Rayman 2 long ago and now any disc doesn't work properly so the only option is to buy the game on gog or download it*
*cries*
*writes that*

Lol, get that shit installed, son.


Big update again: The engine can now render (kind of) shaded polygons (at an atrocious still-CPU-bound framerate), and full level geometry is loaded alongside the objects, which you can mouse-over and select (but not move)! No download yet as the performance is utterly unacceptable and the EXE isn't fully independent at the moment. The new multithreading implementation allows for wireframes to be displayed at full resolution with a constant 30+ FPS, but that proved to be nowhere near sufficient for fills. Time to go learn GPU programming. 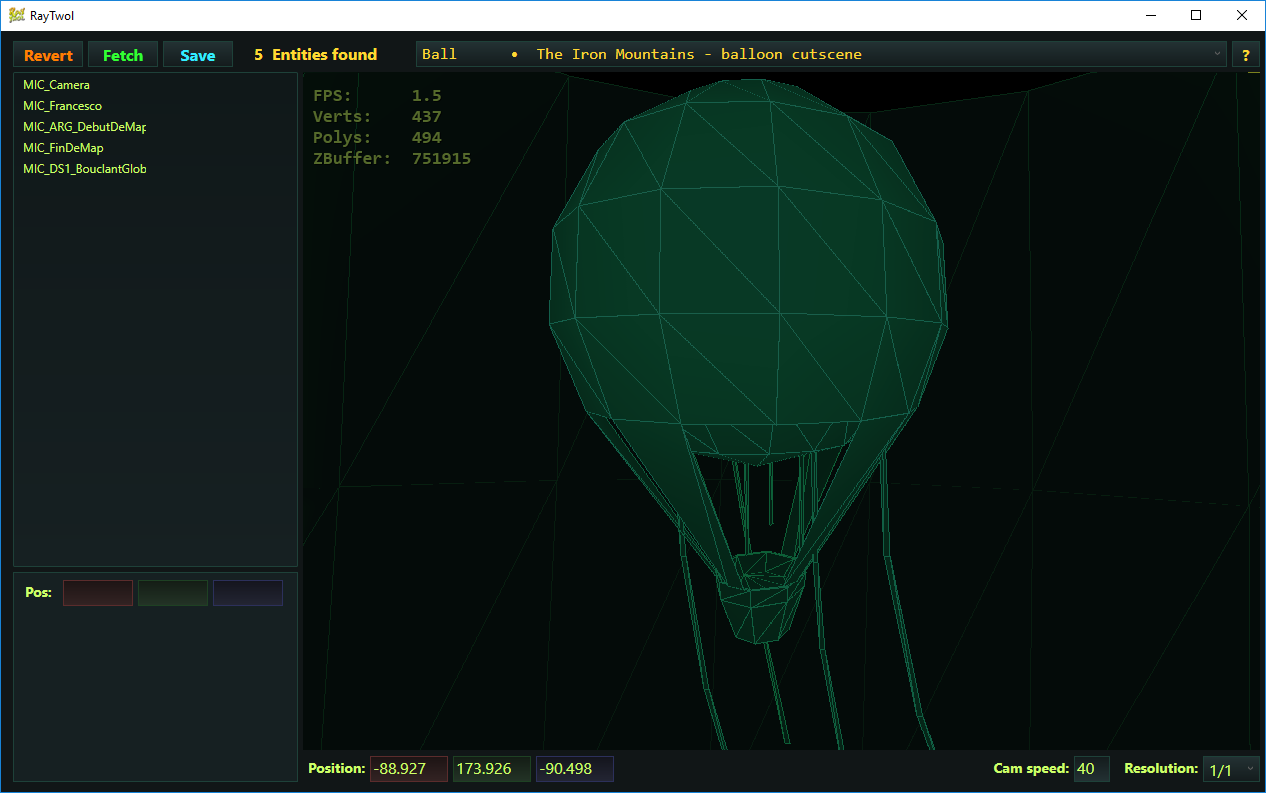 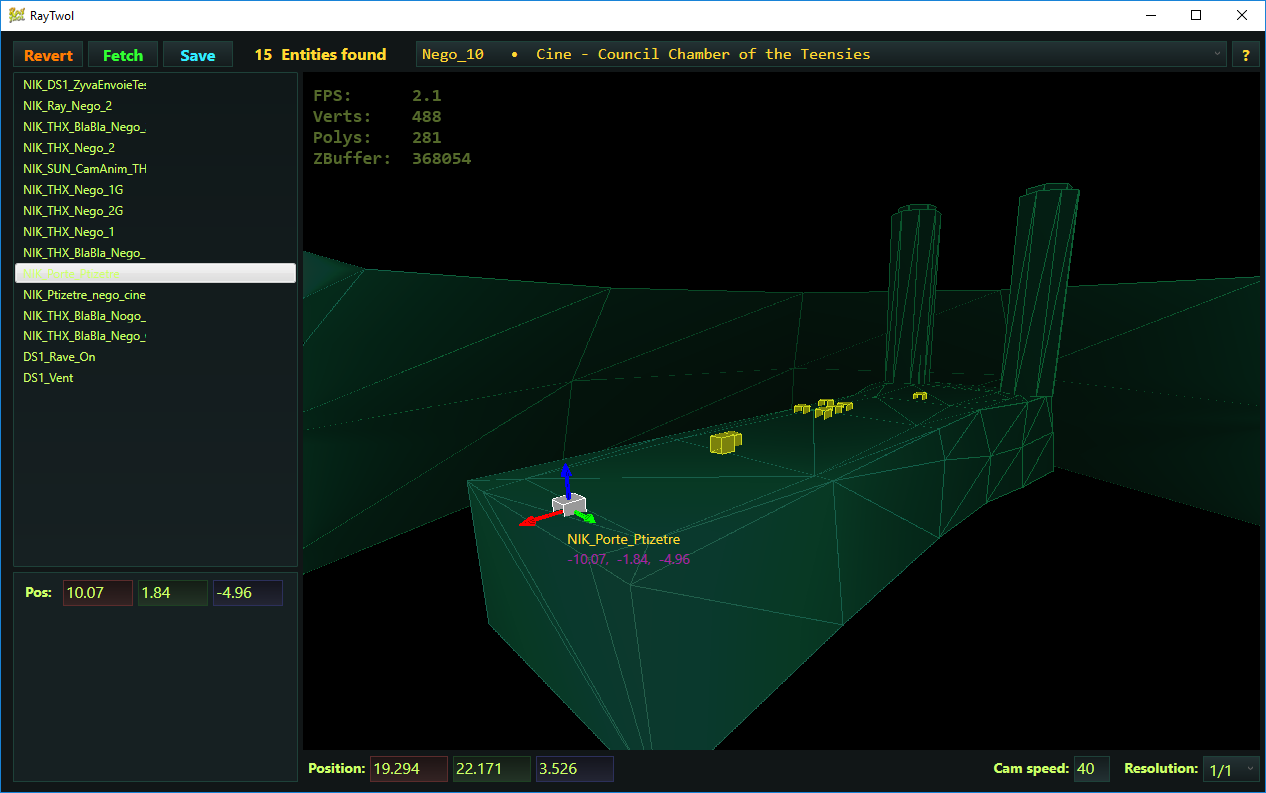 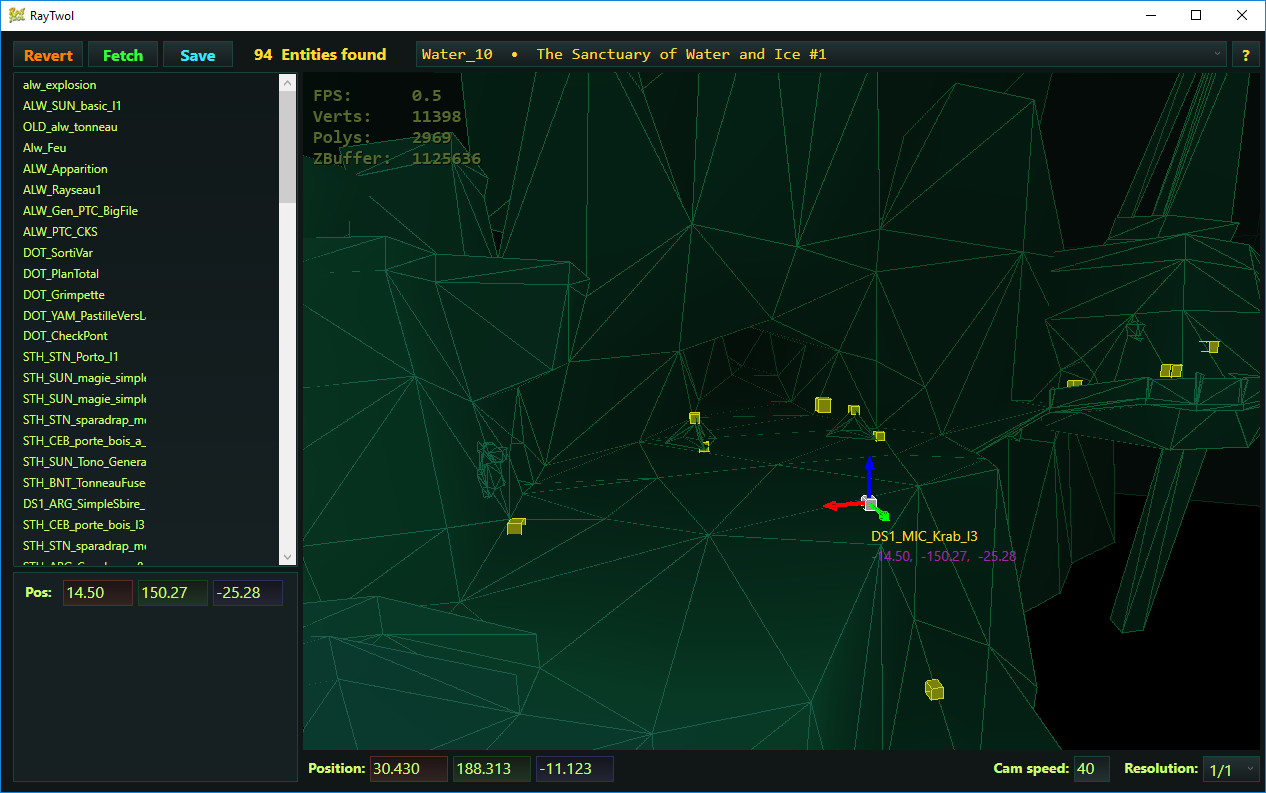 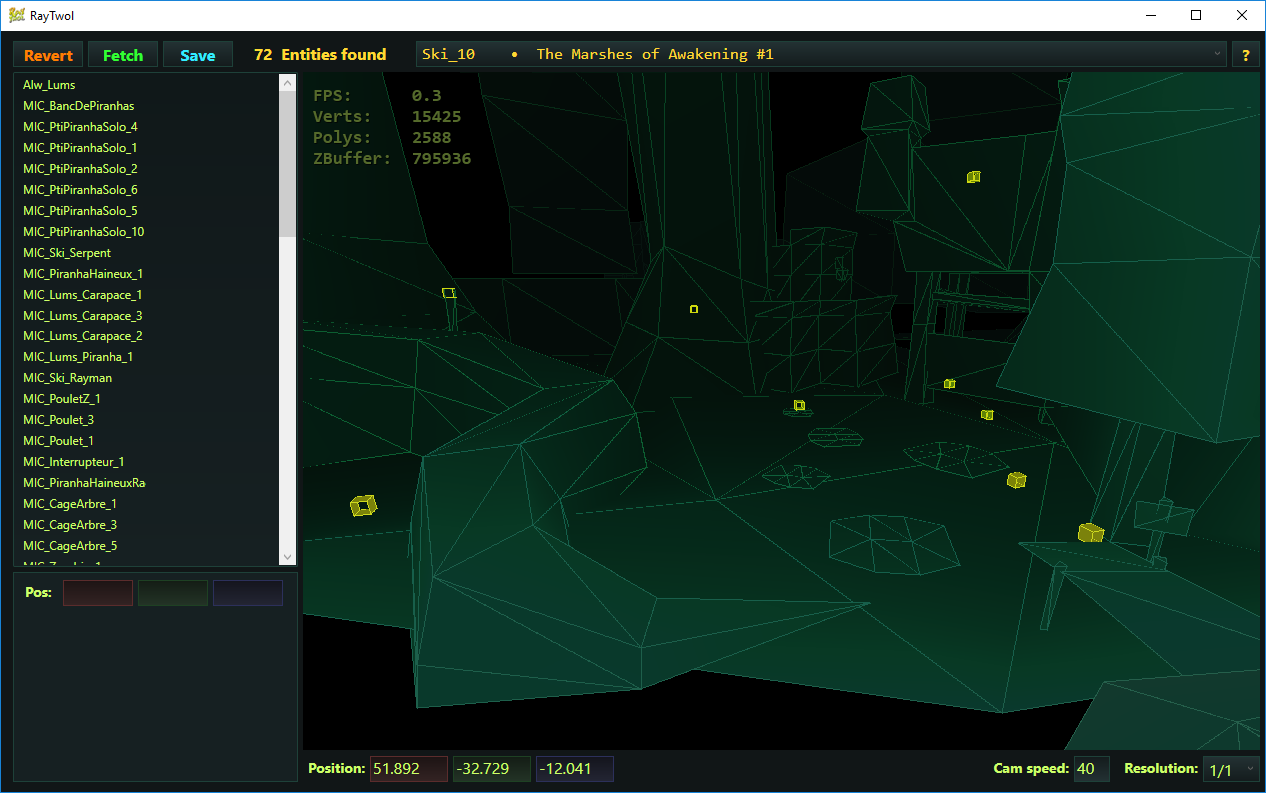 Once again, thanks to Szymekk for decoding the static level geometry!
Top

Hey, it works now! It actually edits levels and you can play them!

Again, before I release, I want to fix up the performance. There's a chance I may switch to working with DirectX for the sake of performance since, while I understanfmd the idea behind GPU programming now, my program might require too much of an overhaul to work with it. DX would also mean easy texture implementation, which is a huge bonus.
Top

Sweet! How much progress have you made with editing world geometry?

Return to “Modding and utilities”