Difference between revisions of "Anguish Lagoon"

Anguish Lagoon (French: Le Lagon de l'Angoisse – The Lagoon of Anguish) is the second level of the Dream Forest, the first world of the original Rayman game. It consists of four parts the first time it is played; when it is replayed, it consists of only two parts, as the second part was a boss battle against Bzzit, and Rayman received the power to hang from Betilla the Fairy in the fourth part.

This small level contains five cages, but only four will be possible to get the first time as Rayman will need to acquire the grappling fist later on to reach one of them. 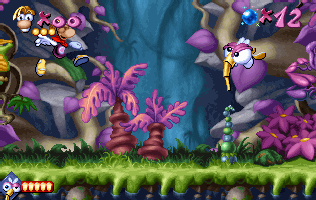 Bzzit is the first boss in the game.

Rayman must fall from the top of the level, where he will have to fight Bzzit. Once defeated, Bzzit starts crying, so Rayman comforts him and they quickly befriend each other. In all versions except the Atari Jaguar version, this phase will not be visited again once Bzzit is defeated, and the player will be taken straight to phase 3 when backtracking. 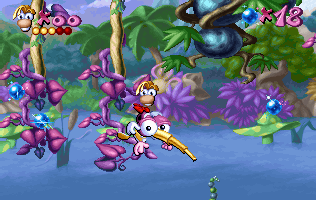 Once beaten, Bzzit helps Rayman to pass through Anguish Lagoon.

Rayman is now riding Bzzit, who flies through this part of the Lagoon. While airborne, Rayman can use his fist to defend himself in most versions of the game, but in the Atari Jaguar version, Bzzit makes use of his proboscis to shoot balls of energy as a line of defense.

In the Atari Jaguar version, there is a string of Tings that form the numbers 1, 3, 6 and 4. This is actually a cheat code; if it is entered with the Jaguar's numeric pad during the introduction sequence featuring Rayman's "walking hands", the code will take the player to the Breakout minigame.

Rayman is given his second power by Betilla the Fairy.

Betilla gives Rayman the power to hang onto the edges of platforms.