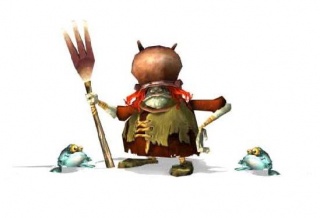 Bégoniax is a boss character who first appears in Rayman 3: Hoodlum Havoc. She is a stout, red-haired, dark-skinned sadomasochistic witch who wears a cauldron on her head. She lives in a hut in the Bog of Murk. She also appears as a boss in Rayman: Hoodlums' Revenge, in the Bégoniax Bayou. She is obsessed with her own appearance, and her failed attempts to brew the ultimate beauty potion have left her both insane and hideous. It is unknown what she looked like before she began experimenting with these potions. When the men Bégoniax falls in love with reject her, she subjects them to her love potion, which transforms them into toads. She then breeds with these toads, producing so many tadpoles that she no longer knows what to do with them.

While Bégoniax was using an outhouse in the swamp near her home, Rayman suddenly falls in through its roof, teleported there by Otto Psi's office. Bégoniax mistakenly thinks that Rayman is spying on her. She calls him a pervert and storms off to her house, muttering angrily under her breath as Rayman tries to apologise, saying ‘I— I'm sorry, I— I didn't really mean to—’. Rayman then enters her home, where she challenges him to a fight around a huge cauldron full of a hot green love potion that temporarily turns anyone who touches it into a toad. In their toad forms, Rayman and Bégoniax are notably slower, and the latter is less resistant, taking on a third more damage than in her normal form.

After the fight, she runs to her magic mirror, and stands on a tall chair in front of it, mockingly calling out to Rayman. When Rayman steps through the mirror, he finds himself teleported to another region of the Bog, where he eventually encounters and defeats Count Razoff in his mansion. Bégoniax then appears in Razoff's dungeon, possibly having come there via Razoff's own magic mirror. It is then revealed that Bégoniax is infatuated with Razoff; she is seen holding and caressing him, with Rayman and Globox witnessing. Telling him ‘Carry me off to your cells and lock me in!’ or ‘Whip me!’ Unfortunately Razoff does not reciprocate her feelings, and repeatedly tells her to ‘Let go!’ or ‘Girl, get off!’ as he tries to struggle free of her grip. She then carries him off. It is unknown what happens to Razoff immediately afterwards.