Mosquitoes[1] are enemies encountered in Rayman 2.

Mosquitoes are Nightmares of Polokus.

They appear as small, round puffs of darkness, with malevolent-looking white eyes. They are constantly in flight, but never more than a short way above the ground. They can be heard before being seen, as they produce a high-pitched buzzing noise, similar to that of a fly or their real-world counterparts.

Mosquitoes always move in swarms. They attack by flying directly towards Rayman. If a mosquito succeeds in hitting him, the hero will lose a small amount of health and the mosquito will die upon impact. However, their tendency to appear in precarious places (such as above water or lava) can make them very dangerous for Rayman, as their weak attacks are still enough to make him lose his balance. 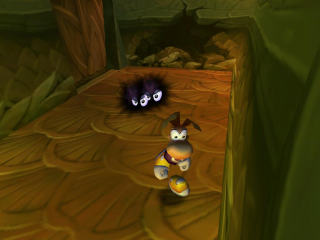 A group of mosquitoes attack Rayman.

In the time leading up to the events of this game, mosquitoes were among the Nightmares of Polokus who managed to escape the Cave of Bad Dreams after the destruction of the Heart of the World by the Robo-Pirates. 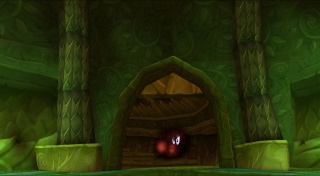 In the PlayStation 2 remake of Rayman 2, a new boss named Boss Chenille is introduced. It looks just like a normal caterpillar, but with some significant differences: whereas they are a purplish-black in colour, Boss Chenille is blood-red; Boss Chenille is also somewhat larger, and it eyes are identical to the mosquitoes' ones.

The first clue as to Boss Chenille's identity is its name; Chenille is the French word for Caterpillar, while the name Boss implies that it may possibly be a leader. And during the battle, Boss Chenille spawns mosquitoes from its body. All of this led to speculation that Boss Chenille may be the progenitor or ‘mother’ of the caterpillar and mosquito species, in addition to the speculation that it is their leader.