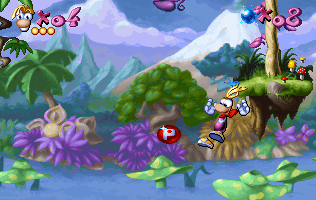 A Big Power gives you a full load of energy points.
—Manual, Rayman

Big Powers, also known as Super Powers, are power-ups in the original Rayman game, Rayman Junior and Rayman Designer, looking like red balls with the white letter P on them. They restore Rayman's full health, and increase his maximum life points to 5. If Rayman loses a life, this effect will be cancelled.

Big Powers were supposed to return in the 2D version of Rayman 2, but it was cancelled.