Difference between revisions of "Black Lum" 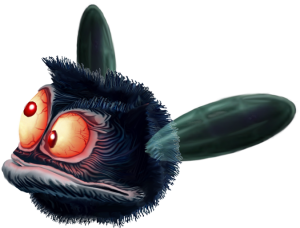 A Black Lum (also known as a Dark Lum) is a type of Lum that was first introduced in Rayman 3: Hoodlum Havoc, and is the result of a Red Lum that had been frightened. Unlike the other Lums in Rayman's world, these do not shine, hence their name, and instead look like hairy insects with big bloodshot eyes and grey lips. André, the leader of the Black Lums, is the only one that has a pair of arms. When several of these form in a swarm, they would steal the fur from animals and create Hoodlums. André himslef does not make an appearance in Rayman 3 (GBA). Black lums are known to like humid, damp areas, particularily swamps, and dislike music.

Once Rayman receives his grimace power from Gumsi, he is able to convert Black Lums back to red ones by making them laugh.

Black lums are similar to the smaller shadow creature.