Difference between revisions of "Boss Bird"

The Boss Bird (referred to in game files as the Guardian of the Music World and as Tchip-Tchip in Rayman Fiesta Run) is a gigantic bird enemy and the first boss in Rayman Origins. He is found in the level 'Hi-Ho Moskito!', acting as the guard of the entrance to the Desert of Dijiridoos and in the Candy World in Rayman Fiesta Run. In Rayman Origins, the heroes must use their mosquitoes to defeat him. Along with the Golem and the Giant Eel, he doesn't become good after being defeated. He also doesn't have Bubos as his weak spots.

The Boss Bird is the biggest bird enemy in the game after the Mocking Bird. He bears a completely round body with yellow feathers, with exception of the eyelids, the wings and the tail tips, which have brown feathers. He also has a big orange beak, a small yellow beard and swollen eyes with slanted eyelids and pupils with different colors; while his left pupil is blue, his right pupil his green. Despite his non-aerodynamic body, he's able to fly, even when he's not moving his small wings.

He wears a blue tambourine on his head, held by a light-brown belt with a peg on it. He also wears a dark-brown belt which surrounds his body horizontally, with a multi-coloured collar and a small bag on the front. The Boss Bird bears a strong resemblance to the Blowing Bird, a considerably smaller enemy. The Boss Bird also resembles his leader, the Mocking Bird, featuring several anatomical similarities such as the round body, the small wings and similar claws.

Role in the game

When the heroes escape from the Jibberish Jungle, defeating all the Lividstones and Hunters with the help of their mosquitoes, they reach the other side of the mountain, as the day slowly turns into night. The sky is suddenly filled with woody flying bombs, which can be sucked or destroyed by the mosquitoes. Suddenly, the Boss Bird appears from bellow, performing his suction attack to swallow the heroes or to suck some bombs to spit at them.

As the level progresses, the characters must avoid the Boss Bird's suction and the bombs that he throws at them, while using attacks to defeat him. While various mosquito shots can damage him, the most effective and fast way to defeat him is to suck and throw four flying bombs at him. When attacked, the Boss Bird squawks strongly, as his stunned body makes cuckoo clock-like sounds. When finally defeated, the Boss Bird deflates like a balloon and falls. After that, his fate is unknown. 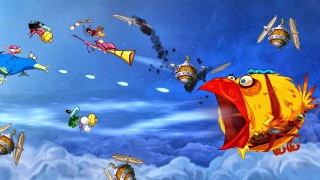 The heroes fighting the Boss Bird

The Boss Bird returns in Rayman Fiesta Run, where he is now named Tchip-Tchip, and appears as the boss of the Candy World.