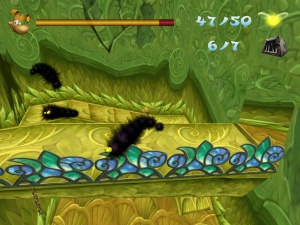 The first type of Shadow Creature that Rayman will encounter, is the smaller ones, resembling a black, furry head with small white eyes. They have one form of attack, where they fly towards Rayman, in a certain amount of time, before colapsing and disappearing. If they succeed to hit Rayman, he will lose a small amount of health and the Shadow Creature will die on impact. They can be heard before being seen, as they produce a sound, similar to a fly. However, they can be trouble, since they mostly appear at places where Rayman is either dangling or flying, making a single hit a possible death, considering there will be deadly water, lava or far heights if Rayman loses his grip.

The other type of Shadow Creatures, has a very different act, but looks rather similar to the smaller Shadow Creatures. They are the Caterpillars; long, wormlike creatures, made from a line of the smaller Shadow Creatures, yet only the front ball has eyes. They often move in packs, having a sertain route where they snake themselves around. They either jump from obstacle to obstacle or move on the ground. They attack Rayman by jumping on him, and does not die at the impact. They can also sometimes be hard to kill, as they move a lot and can be hard to hit. Similar to the Walking Shells, some have respawn areas, which makes them an enemy that can take its time to defeat. 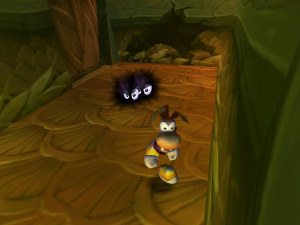 The first Shadow Creatures to be encountered, is found in The Fairy Glade, at the small crater where Rayman has to climb a large tree and slide down a waterfall. However, many people never really see them, as it is possible to skip the combat. They can also be found later on in the Fairy Glade, at the second visit through the Echoing Caves and in the Cave of Bad Dreams/the Kingdom of the Dead (PS1 version), the Sanctuary of Stone and Fire, the Sanctuary of Rock and Lava, Beneath the Sanctuary of Rock and Lava and Tomb of the Ancients. Caterpillar's are also seen in various levels in Rayman 3 (GBA), and unlike those in Rayman 2, after one hit they fall to the ground and can be picked up. However, this action serves no purpose. If they do not fall into lava, spikes etc. or get picked up and thrown into a hard surface or other creature, they can respawn themselves.

In Rayman 2: Revolution, there is a miniboss called Chenille, which appears in the Sanctuary of Rock and Lava/Beneath the Sanctuary of Rock and Lava (PS2 version). It resembles Shadow Creature, only red and splits into smaller Shadow Creatures when shot at. It is suggested that Chenille may be the Shadow Creatures leader, but such has never been confirmed. Their origin is unknown, however many believe that they are one of the outcomes of Polukus' nighmares, and their presence in the Cave of Bad Dreams seems to imply this. Others believe that they are leftover spawns of Mr Dark's evil. It is not easy to tell, since no information is given throughout the game (or game manual).