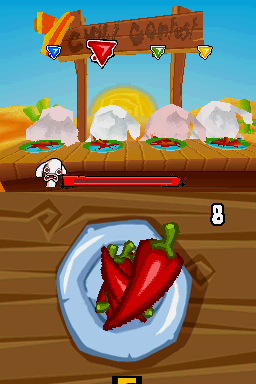 These Rabbids feast on chillies.

In this minigame, four Rabbids compete in a "Chilli eating contest". This is a multiplayer game in which up to four players can play. In a single player game, (the single player is indicated with a red triangle) the aim of the game is to eat as many chillies as possible within ten seconds. The more a Rabbid eats, the more he becomes red in colour, and the higher he will shoot upwards with fire breath. In Adventure mode, the game will end after the ten second limit, regardless of how high in the air the Rabbid rockets upwards. About 800 points are needed to achieve the "Excellent" status.

In Score mode, the player is given 15 seconds instead of 10 to consume as many chillies as possible and then rocket as high up into the sky as possible. The higher the Rabbid is, the more points are given.