Once it was bustling with life. Now, this lush woodland is overrun with hordes of no-good Hoodlums. They’ve built up towers, bunkers, and other obstacles to make Rayman’s trip here anything but a walk in the park.
—Press release, Rayman 3

Clearleaf Forest, also known as the Forest of Clear Leaves, is a location found in Rayman 3 and the Game Boy Advance game Rayman: Hoodlums' Revenge. In the former game it follows the Fairy Council, and introduces the player to the Heavy Metal Fist, the LockJaw and the Shock Rocket. It is the first level to have a boss (the Master Kaag), and is also the first level in which Globox first discovers the infamous plum juice under the control of André.

Clearleaf Forest is a large, formerly peaceful forest that has been invaded by the Hoodlum army. Rayman must make his way past natural obstacles and Hoodlum installations in order to bring Globox to Otto Psi, the first of three Teensie doctors, whom the heroes hope will be able to extract André from Globox's stomach.

After Rayman and Globox fall down from reaching the end of the first Teensie Highway, Globox questions: "Who turned off the nice music? Hope I didn’t break anything." André then tells him to shush, as he demands to get out of Globox's stomach and to have some plum juice. In order to get to the barrel, Rayman must pass through a building after dealing with Hoodmongers outside. He can then free his first ever Teensie, a Sylkin who gives him a Vortex can of Laser-Washing Powder that he had stolen from the Hoodlums. Rayman can then lower the nearby meadowscrew impeding his progress. Rayman and Globox go along a bridge, only to find a wooden door with the face of a Hoodlum carved onto it, in their way. As Rayman wonders how to get it open, a couple of Hoodmongers come out from nowhere and ambush Rayman. One of them is in possession of a Heavy Metal Fist can; Rayman can use this to break down the door with a fully charged fist and helicopter down to the next section of the forest.

As the two reach the bottom, Rayman must defeat a gang of Hoodmongers who guard a barrel of plum juice. After all are defeated, Globox goes to the barrel, and immediately drinks it down, per André's demand. As he finishes, he takes Rayman to a waterfall teeming with piranhas and starts to swim upwards with Rayman clinging onto his back. Now at the top, Rayman then leaves through a cave.

Rayman and Globox land in a small area surrounded by mushrooms. Several Hoodlums arrive by Zeppelins, one drinking heavily from a keg of plum juice. Rayman must destroy them to gain a Vortex can of Laser-Washing Powder; with it he must lower a meadowscrew to gain access to the higher levels of the forest, where there are a couple more remaining Hoodmongers. After defeating one of them that has the dollar ($) sign, a Heavy Metal Fist appears, which Rayman uses to smash through a barricade to get to a waterfall-filled area. Meanwhile, Globox drinks down the plum juice, inflates as a side effect, and floats away. Rayman has to advance and as he helicopters a good distance, he then smashes a cage containing a Sylkin that gives him his first can of the LockJaw. With it, he makes it safely to the other end of the creek, where he finds Globox, still intoxicated, standing in front of a Hoodlum camp. Rayman must fight off the many Hoodmongers and a Slapdash that guard the area before smashing down a wooden barricade. With Globox no longer intoxicated, Rayman has to stick a plum on its post to get up to a Hoodlum fortress.

Rayman and Globox walk along hallways filled with crates of plum juice bottles. In the center of a circular room lies the first Hoodmonger Soldier. Defeating him rewards Rayman with his first ever Shock Rocket can of Laser-Washing Powder. This power makes his fist as a rocket. Even with Globox's displeasure of the use of the costumes, Rayman uses the Shock Rocket to maneuver through three obstacle courses to hit three targets of himself and Globox to open three doors. Moving through the hallways, Rayman encounters a Hoodboom, but has no time to defeat him as he quickly runs through a gate which closes sharply. Rayman is trapped unless he uses a Vortex and LockJaw (dropped by two Hoodmongers) to lower a meadowscrew and swing on a flying hook. Once he's across, he'll need to activate a switch that opens the gate so Globox can get through. A band of Hoodlums is inside, naturally, and Rayman will have to defeat them all for the aforementioned Hoodboom to appear. He is too high up for Rayman to reach, so Rayman will need to find and kill a Slapdash to obtain another can of Shock Rocket and use it to hit the Hoodboom. After every Hoodlum is defeated, Globox drinks a barrel full of plum juice and belches out a purple bubble - Rayman can bounce onto it to help him reach the higher level of the fortress. Inside is a mass of crates; Rayman must make his way through the fortress, freeing every Sylkin he comes across. Each will give him a Heavy Metal Fist can, useful for smashing down wooden barricades with more Sylkin Teensies hidden inside. Eventually, he will have enough cans to take him through a barricade at the far end of the fortress.

In the first room, above Globox, is an air vent, hiding a lever. If Rayman can maneuver a Shock Rocket to activate the lever, a trap door will open up, containing yellow and red gems.

Rayman and Globox defeat a Hoodmonger Soldier and drop down a hole into a dark cave, filled with Red Lums. The cave only has one exit: Into the Clearleaf Arena, where a small Hoodlum rides atop his stomping machine, the Master Kaag. Rayman must trigger three switches at a time to make a can of Shock Rocket appear. Once Rayman has obtained the power, he must shoot the Master Kaag's pilot in the back, and then repeat this process two more times to defeat him (on the third time, Slapdashes appear on the switches). Rayman then takes control of the Master Kaag and rides it into battle, destroying three waves of ten Hoodmonger Soldiers to open a gate. Once the gate is opened, Rayman drops off from the Master Kaag and continues to the gate where Globox comes out from hiding, and the duo enters Otto Psi's office.

Rayman and Globox enter the office of Otto Psi only to find a group of Hoodmongers running around inside. Rayman must kill all of them to open the door.

After Rayman and Globox enter the office, a cutscene plays, in which Otto is examining Globox in his theatre, and attempts to coax André out of his stomach by raising his arm, and playing it as if his arm was an electric guitar. Unfortunately, while André is annoyed with this music, it fails to remove him from Globox's stomach, so Otto finally sends the duo away to the Land of the Livid Dead to meet his friend Roméo Patti, the second Teensie doctor.

Behind where Rayman starts is a hole in the wall. If examined, Rayman falls down into a room with several gems, including a green one. 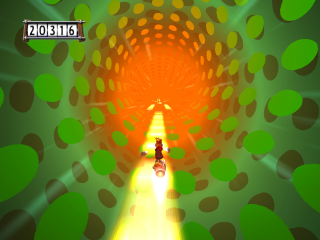 The sixth and final stage of Clearleaf Forest.

This Teensie Highway is supposed to take Rayman and Globox to the Land of the Livid Dead, in which Roméo Patti's office is situated in. But at the end of the wormhole, Rayman fails to reach a series of staves that happen to be too high for him, and tumbles away from the dimension, leading him into the Bog of Murk, and separating him from Globox.

Images from the early production of Rayman 3