Climb Out is the fifth level of the Ticklish Temples, a world in Rayman Origins. The level is focused on progressing upwards while avoiding the many spiky flowers, as demonstrated in the level selection hub. This is the third level from this world and fifth overall that is included in the Back to Origins mode in Rayman Legends.

Rayman and the team start out in a relatively quiet and dark place, but as they shortly advance, many Darkroots appear to ambush them. They need to get onto the collapsing platform and safely fall down to a body of water. The exit is located to the right.

The team will now begin to move upwards in the area. Nenuphars and caterpillars help out in the process. The first secret area can be found by using the Swingman to get onto a platform covered with dark foreground vines. After that is done, the heroes can continue to go up. The first Skull Coin can be collected through using the s Swingman close by, while avoiding the spiky flowers. The second Skull Coin can be acquired by going to the left of where the first coin was, using nenuphars to reach it. The exit is close by, next to three Darktoons.

The players have to use the wall run power to reach the two Lividstones. The team can crush them in the middle and also, the Electoon cage.

Eventually, the heroes will advance upwards again. Nenuphars help out even more in the process. The third Skull Coin can be retrieved by jumping from nenuphar to nenuphar on the right, while not getting hit from the spiky flowers. After a while, the exit will be reached.

Throughout the area, there are rolling stones with Darktoons attached to them. They will have to be used as a walljump platform in order to continue. The fourth Skull Coin can be collected by body slamming on a flower bulb and using one of the stones on the right. Later, the players need to use the large moving grassy platforms to perform walljumps. The exit is to the left at the top.

This area is full of Darktoons. As the players continue to progress, they will aid the help of more caterpillars, but this time some of them are purple, and will back away once a player jumps on it. If the team takes the left path and performs walljumps, they will pass some spiky flowers and obtain the fifth Skull Coin. After some time of advancing, the team will use geysers to get close to the exit. If the players go onto a platform that has foreground vines, they will end up finding the second secret area.

The heroes need to ride on mosquitoes to find the Electoon cage. Throughout the flight, they have to avoid getting crushed from collapsing platforms as well as falling ones. The team will then need to shoot projectiles at two hunters and a Lividstone in order to get off and break the cage open. 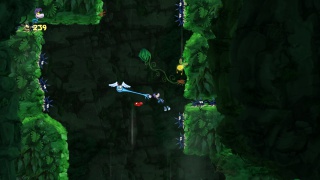 The sixth area of the level.

The heroes need to be quick, as all of the platforms with Darktoons attached will begin to cave in. Nenuphars and swingmen help the players in reaching the exit that is not too far away. 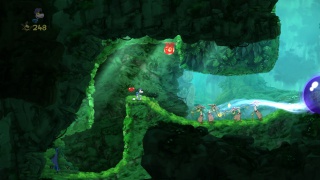 The seventh and final area.

Now, the team can destroy the four Lividstones manually, or hit a flower bomb to make a platform collapse and crush them. When all are defeated, the Electoon cage can be broken to end the level. The team will pose on the photoboard as the Magician waits for the total amount of Lums that were collected in the level.

In the Back to Origins version, there aren't many differences between the original version; except of the notable elements from Rayman Legends replacing some of the elements from the game.