Difference between revisions of "Cloud"

Clouds are platforms found in all worlds of the original Rayman game, except for the Dream Forest. There are many kinds of clouds. Some of them are static, and others follow various trajectories. Among static clouds, there are rebounding and trampoline clouds, the latter allowing Rayman to jump higher with the correct timing. The are also also vanishing clouds, which disappear once Rayman steps on them, or at regular intervals. During the battle against Mr Stone, moving vanishing clouds appear, but these occur nowhere else.

In the Atari Jaguar version of the game, vanishing clouds have eyes, which snap open to reveal a malevolent face an instant before they disappear from under Rayman's feet. These eyed clouds, however, do not open their eyes in any other version of the game, but they do still appear to have closed eyes. They make a reappearance in Rayman 3's 2D Madness minigame, where they are larger, and bounce Rayman into the air rather than vanishing when he steps on them. 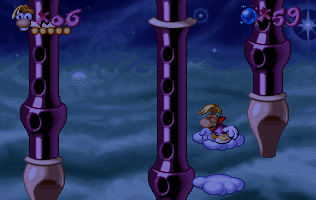 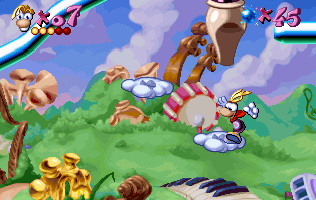 Vanishing clouds are not a safe place to be! 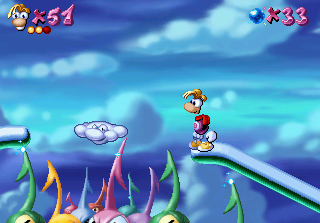 An eyed cloud in the Jaguar version Oversized eyed clouds appear in Rayman 3's 2D Madness minigame, where they are bouncy and do not vanish when stepped on
Retrieved from "https://raymanpc.com/wiki/script-en/index.php?title=Cloud&oldid=40223"
Category: