A master predator, the son of Count Zaroff – a most dangerous game-hunter, if ever there was one! – and grandson of Nimrod and Artemis, Razoff holds the chair of Cynegetics at the University of Tyr-Kainkou. At least, that's what he claims...
—In-game description, Rayman 3

Only descendant of the Shoedsackovskaïa family, Count Razoff settled a long time ago in the swamps in order to perpetuate the familial tradition. In fact, each member must come back once adult with an extraordinary prey. Unfortunately, Razoff has never found a prey matching up to those of his ancestors: the legendary Abominable Geranium of the Seas of Cockatoo or the Space Mama of Picture City.
—Official site[1][2] & dossier presse[3], Rayman 3

Count Razoff Shoedsackovski is a boss character who appears in Rayman 3. The last descendant of the royal Shoedsackovskaïa family of maniacal hunters, Count Razoff is a tall green reptilian creature who lives in a mansion in the Bog of Murk. He bears some resemblance to a Teensie, as well as to the species of Inspector Grub from the Animated Series. Dressed in a red and gold outfit, he sports a shotgun which shoots arrows at any intruders that dare to enter his mansion. He is a formidable but extremely egotistical hunter, and his mansion is decorated with a great many paintings and sculptures of himself, as well as mirrors and ‘statues of his finest catches’[4], including Uglies, piranhas, and Ssssam the Watersnake from Rayman 2.

The in-game information states that Count Razoff is the son of Count Zaroff, and the grandson of Nimrod and Artemis. He also claims to hold the Chair of Cynegenics at the University of Tyr-Kainkou. He has settled in the Bog of Murk, as is his family's tradition, and he will return to his homeland only when he has captured an exotic prey. He also appears to enjoy capturing lesser creatures; several Uglies are imprisoned in his mansion, and at least one Mawpaw is locked up in his dungeon. It is not known if his mansion was handed down to him from his father, or if each member of the family must have their own dwelling constructed in the region. ‘Schoedsackovski’ is not explicitly mentioned as Razoff's surname, but this detail can be derived from actual Slavic surnames of similar form.[5] 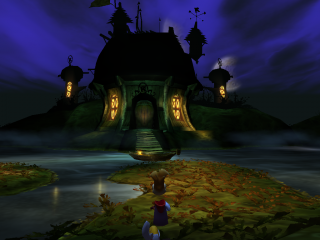 The entrance to Razoff's mansion.

Razoff's mansion is located in the Bog of Murk. It is very large and classical mansion with many statues inside including statues of Ssssam, piranhas and a statue of Razoff riding a Goaty (a scrapped character from the game). There are also several bug-like creatures called Uglies which can be found chained-up in his mansion; if Rayman frees the Uglies, they thank him by giving him Red Lums before flying away. Typical for Razoff, in his mansion is a vast array of guns and a cannon. Globox was accidentally transported to the basement of Razoff's mansion when he was separated from Rayman in the Teensie Highway. Also in the basement are a large ball and chain which Razoff attempts to kill Rayman with, a magic mirror similar to the one found in Bégoniax's house, and at least one Mawpaw, a large plesiosaur-like creature with a hand for a head which Razoff was apparently keeping imprisoned, and who helps Rayman out in the battle by giving him Heavy Metal Fist power-ups and placing him back on the platform when he falls down.

Razoff has several statues of Ssssam the snake in his mansion, hinting that Razoff has encountered, or at least knows of, the character. Most likely, Razoff has hunted Ssssam at some point. Whether he actually killed or captured Ssssam at some point between Rayman 2 and Rayman 3 is unknown; however, it should be noted that Razoff's inherited obligation to capture an exotic prey does not yet seem to be fulfilled by the time of Rayman 3.

The room in which Razoff's telescope is housed contains a wide array of switches and control panels. Some of the equipment seen in the room is identical to that used by the Robo-Pirates in Rayman 2, which suggests that Razoff may be putting some old Robo-Pirate wreckage to work. The Hoodlum vehicle Céloche, fought in the Land of the Livid Dead, also appears to be constructed from the wreckage of Robo-Pirate installations. 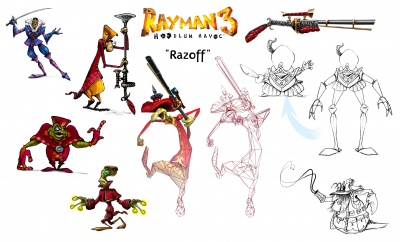 Count Razoff is notable in that the player controls him in three different minigames in Rayman 3. Excluding heroes such as Rayman and Globox, this makes Razoff the one character in the series that is controlled most often by the player.