Count Razoff Shoedsackovski is a boss character who appears in Rayman 3: Hoodlum Havoc. The last descendant of the royal Shoedsackovskaïa family of maniacal hunters, Count Razoff is a tall green reptilian creature who lives in a mansion in the Bog of Murk. He bears some resemblance to a Teensie, as well as to the species of Inspector Grub from The Animated Series. Dressed in a red and gold outfit, he sports a shotgun which shoots arrows at any intruders that dare to enter his mansion. He is a formidable hunter, and his mansion is decorated with statues of the animals he has hunted, including Uglies, piranhas, and Sssssam the Watersnake from Rayman 2.

The in-game information states that Count Razoff is the son of Count Zaroff, and the grandson of Nimrod and Artemis. He also claims to hold the Chair of Cynegenics at the University of Tyr-Kainkou. He has settled in the Bog of Murk, as is his family's tradition, and he will return to his homeland only when he has captured an exotic prey. He also appears to enjoy capturing lesser creatures; several Uglies are imprisoned in his mansion, and at least one Paluchard is locked up in his dungeon. It is not known if his mansion was handed down to him from his father, or if each member of the family must have their own dwelling constructed in the region.

Each member of Razoff's family is named after a great fictional or mythical hunter. Razoff's father, Count Zaroff, is named in reference to the character General Zaroff from Richard Connell's 1924 novella ‘The Most Dangerous Game’. ‘Razoff’ is simply ‘Zaroff’ with the ‘Z’ and the ‘R’ switched, and the characters bear many other similarities. Nimrod, Razoff's grandfather, is named after a great biblical hunter, and Artemis, Razoff's grandmother, is presumably named in reference to the Greek goddess of hunting. 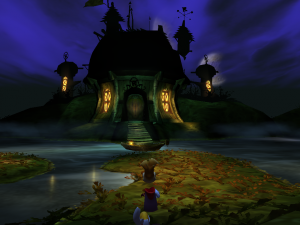 Razoff's mansion is located in the Bog of Murk. It is very large and classical mansion with many statues inside including statues of Sssssam, piranhas and a statue of Razoff riding a Goaty (a scrapped character from the game). There are also several bug-like creatures called Uglies which can be found chained-up in his mansion; if Rayman frees the Uglies, they thank him by giving him Red Lums before flying away. Globox was accidentally transported to the basement of Razoff's mansion when he was separated from Rayman in the Teensie Highway. Also in the basement are a large ball and chain which Razoff attempts to kill Rayman with, a magic mirror similar to the one found in Bégoniax's house, and a Paluchard, a large plesiosaur-like creature with a hand for a head which Razoff was apparently keeping imprisoned, and who helps Rayman out in the battle by giving him Heavy Metal Fist power-ups and placing him back on the platform when he falls down.

Razoff is last seen struggling in the grip of Bégoniax, the hideous witch who is madly in love with him. It is said that Bégoniax exacts revenge on the men who reject her love by transforming them into toads, and that she then breeds with them, producing so many tadpoles that she does not know what to do with them. This offers a clue as to Razoff's potential fate.

In Commando, a top-down third-person shooter, Razoff is delighted to find that his land has been invaded by Hoodlum trespassers, as this gives him an excuse to take potshots at them. The player controls the hunter as he battles his way through a small Hoodlum army. Since this minigame depicts the Hoodlum invasion, it is most likely that it takes place at around the time of Rayman 3. His gun can kill enemy Hoodmongers with one hit and Hoodbooms with three; judging by these statistics, the gun must be fifty per cent more powerful that Rayman's telescopic fist.