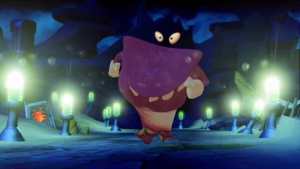 Dark Globox as he appears in Rayman Arena

Dark Globox is a one-off character that appears only in the North American releases of Rayman Arena for the Gamecube and XBox, as an unlockable, playable character. Despite not appearing in any European release as a character, his theme song is used to represent Globette in Rayman Rush in all regions.

Dark Globox is a larger, uglier doppelgänger of Globox. His skin is purple in colour, he has a tuft of messy black hair on his head, has wonky yellow buck teeth sticking out of his mouth, and on his back is a picture of a skull, to represent his nastiness. He uses the same technique to shoot as his mild-mannered counterpart, but to glide, he spins into a mini tornado in the air, much like the Tasmanian Devil from the Looney Tunes. Being a dark character, he is very bad-mannered, and is unable to speak anything that's decipherable.

A cyan skin is available as an unlockable, which makes him look more similar to Globox.