Dashing Thru the Snow

Dashing Thru the Snow is the second level of the Gourmand Land, the third world in Rayman Origins. This level is similar to all of the other levels in the Frosty Delights area. This is the first level from this world and seventeenth overall that is included in the Back to Origins painting in Rayman Legends.

The heroes begin in a quiet area on icy platforms next to a moving heart bottle. They soon encounter some bodies of Piranha infested red water. The smaller platforms in the water will start to sink from the heroes' weight: if they stay on the same platform for too long, it begins to sink into the dangerous water. Eventually they will confront a new enemy, a fire breathing Baby Dragon Waiter on skates; if he spots the heroes, he will breathe fire, meaning their best approach is to attack him from behind. The exit can be found not to far from here. 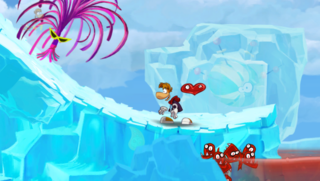 The first relic can be found in the icy platform, just to the left of Rayman.

As soon as the heroes enter this area, the first relic can be found. It is located inside an icy platform, just to the right of a Palmito.

As the heroes enter this area, there will be a passage located in the middle of some spiky oranges. This passage leads them to a funnel, which will enlarge them to their original size. The second Skull Coin of the level can be collected by quickly destroying blocks of ice, while avoiding from tin cans that could potentially crush them. The heroes can now use another funnel, which will both shrink them and propel them to the exit. 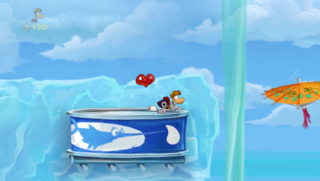 The second relic can be found in the tin can, just beneath Rayman.

The second relic can be found near the stack of ice blocks; it is located inside a small blue tin can to the upper right of them.

In this area, the heroes will meet another couple of purple Al Tranquilo; they will need to use more bubbles in order to avoid spiky birds and safely cross the water. The third Skull Coin of the level can be found in between two rotating spiky birds. The fourth Skull Coin can be retrieved by either using the bubbles to reach an icy platform above, or performing walljumps to reach a higher platform if the heroes are no longer standing on bubbles. The fifth Skull Coin can be found by dropping down and gliding past the Baby Piranha infested water, while avoiding green spiky birds. The heroes can use a funnel to grow back to their original size, then defeat two Baby Dragon Waiters and proceed to the exit. 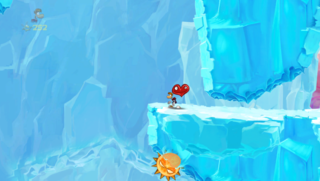 The third relic can be found below an icy platform, situated beneath Rayman at the top of a spiky orange.

The third relic can be found in this area just below an icy platform, It is situated at the top of a spiky orange. 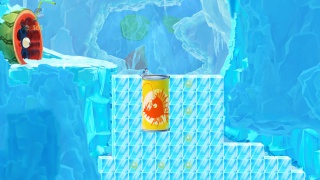 The heroes will need to perform crush attacks on small blocks of ice, in order to go down towards the exit. Some blocks of ice contain frozen Lums. As the heroes continue downwards, they will eventually fall down and grab onto a Swingman. The second secret area is to the left, and the exit is to the right. 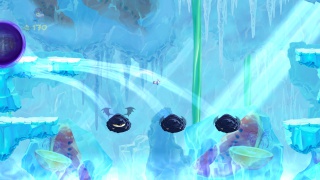 These Psychlops can be bounced on.

Firstly, the heroes must advance to the right side of the area by bouncing on the sleeping Psychlops, where they will enlarge to their original size; they can now defeat the Psychlops on their way back to the Electoon cage, meaning they will be able to break it. 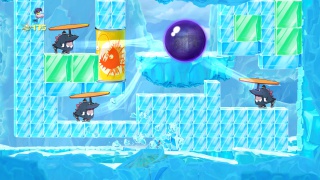 The final area of the level.

The heroes can break the ice blocks the Baby Dragon Waiters are skating on to make it easier to defeat them. Once they have been defeated, the cage can be broken; the heroes will then pose on the photoboard as the Magician waits to see the how many of Lums the heroes have collected throughout the level.