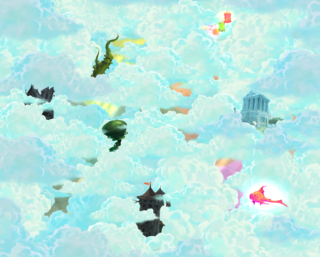 The Desert Kingdom on the World map (top-right)

The Desert Kingdom is a world which appears in Rayman Adventures in some of its Marathon challenges. It reuses level structure from the Land of the Livid Dead as well as the music, but with new assets. The world was originally going to be a world the player could enter at any time from the World map. It was however cut after the textures were created, which is why they were used for an event.

The Desert Kingdom is a world within the Glade of Dreams where the desert folks live. The Incrediball family The Anubii are revered and worshipped by many of the desert folks. It is also said that no one knows the secrets of the Great Purramids better than the Sphynxies family.