Eig is a very mysterious character from Rayman 2, also known as the Swamp Monster. He is sometimes mistaken for Jano, the Guardian of the Cave of Bad Dreams, but he is actually a different character. According to the Knowledge of the World, he is a creation of Polokus, and he spends his time getting drunk on the fermented swamp-waters of the Marshes of Awakening. 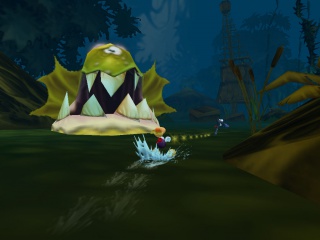 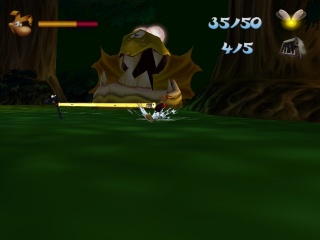 Eig in the Dreamcast version of Rayman 2

In Rayman Revolution, Eig distinctly appears when traveling across the Marshes of Awakening. While he seems to follow Rayman and Sssssam, he is quite pacific and doesn't attack them. Although contact with Eig will cause Rayman to lose his hold on Sssssam and fall into the swamp-water, it is unclear whether or not this is Eig's intention.