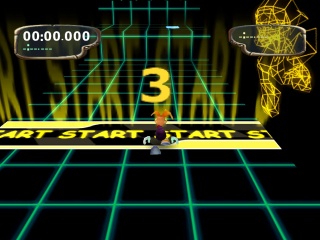 This race track only contains the Training mode. The landscape is, unlike the twelve main race tracks which feature a Rayman 2-related theme, a 3D skeleton. Its level structure can vary as long as the player keeps replaying the race course, since it is a fragment of a straight forward map just like Born To Slide. It contains wireframes of Rayman, Tily and an unknown character, normal and inverted speed arrows, pink walls with writings falling down, pink bumpers, climbing walls, slippery paths and the fourth part of a lap fragment of Speed Stress. In the PC version of Rayman M, there is an exclusive picture of Rayman dressed like the character Neo, from the sci-fi action film The Matrix, with green code against the black background. A wireframe model of Rayman in this costume can be found in the Future race course.