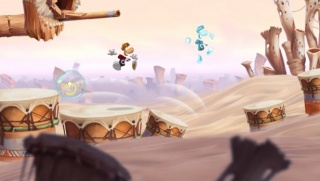 Ghost Mode is a gameplay feature exclusive to the PlayStation Vita version of Rayman Origins. It was designed to compensate for this version's lack of co-operative multiplayer.

In Ghost Mode, the player must race against their 'ghosts' – copies of themselves moving through the level that were recorded while playing earlier. Similar gameplay features have long appeared in racing games such as Gran Turismo.