GlobXmas, also known as Snowbox, is one of the playable characters in Rayman Fiesta Run and a purchasable costume in Rayman Adventures.

GlobXmas shares the same look as Globox, however, he appears to resemble a Yeti. His skin is purple and is covered in white, unkempt fur that have some gray spots speckled around. His eyes are yellow and he has a set of fangs. His fingernails are black.

The abominable Snowbox was thought to be a myth, but this holiday season he’s been sighted stuffing his face with snowcones!
—In-game description, Rayman Adventures

Before ever being implemented into the game as a playable character, Snowbox appeared in official artwork of the game that promoted the Christmas 2015 update of Adventures and wished happy holidays. Snowbox's textures were also found in the files of the game way before he was playable.

In the 3.5.2 update, Snowbox had started to appear in the high score end screen after the player had completed a level with his new name, Snowbox, meaning he was already implemented in the game as playable but with nobody being able to access him just yet. Some users had reported that he appeared as a purchasable costume.

Within the 3.6.0 update, Snowbox has been made into purchasable costume within his own costume pack. 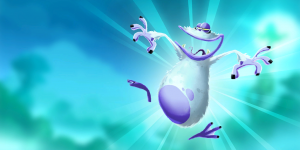