As shy as her friend, she is yet a fierce competitor when it comes to racing. Globox himself is never sure he can defeat his beloved friend.
—Rayman Rush manual 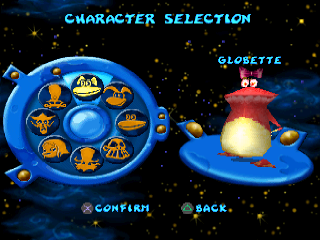 Globette, as seen in the character-selection screen of Rayman Rush.

Globette is an unlockable character who appears only in Rayman Rush. In the game's manual, she is referred to as Globox's friend, though it is unknown if she is of any relation to him or his wife, Uglette, or anyone else in his family. Globette is dark pink in colour and wears a bow in a similar fashion to Bimbette - one of Globox's daughters - although it is smaller. She shares her theme music with Dark Globox when she is selected by the player. Despite being a member of Globox's species, much of her voice resembles that of Tily, who also appears in Rayman Rush.