Difference between revisions of "Globox"

Globox is a major character in the Rayman series who makes his début in Rayman 2: The Great Escape. This was followed by major roles in Rayman M, Rayman 3: Hoodlum Havoc, Rayman Origins and multiple handheld games. He is Rayman's best friend and has been since before the events of Rayman 2, though how they came to meet is unknown.

Globox resembles a large, fat amphibian, and is blue-green in colour with a pale yellow belly and hands. While the rest of his body is fat and heavy, he has long thin arms, and his webbed feet and small eyes float separately from his body. He is noticeably taller than most of the inhabitants of the Glade, with the exception of such characters as Ly the Fairy and Clark the Giant. Globox has an extremely large mouth with a long purple tongue, and he often uses it to store things such as Silver Lums, and, accidentally, André. His children have the same ability, as was shown when, late in the events of Rayman 2, one of his sons swallowed the fourth Mask of Polokus when he found it in the Pirate Mines and gave it to Rayman once the latter had freed him and his siblings from the Spyglass Pirate's Robot Dinosaur.

Physically, Globox is quite strong, and provided that he has the confidence to (under the influence of plum juice in Rayman: Hoodlums' Revenge), he can inflict a strong blow on enemies, namely Hoodlums. Unfortunately, he is allergic to plum juice, and when André was inside his stomach, he would force Globox to drink some and then suffer from its effects, which include getting drunk and burping out giant, bouncy bubbles. At an early point in Rayman 3, he realises that he can swim, even swimming up an entire waterfall. Plum Juice can also give him an ability to fly, or float, into the air, allowing him to avoid such terrains in Rayman 3 that would prove difficult. This was most likely to have been inspired by this hovering technique in Rayman M. All versions of Rayman M suggest that he can run as fast as the others, despite his weight, but elsewhere he tends to walk slowly in a nervous state.

Globox has the power to form rainclouds, albeit small ones that draw enough rain to grow a plant quickly, put out fires and to rust a Robo-Pirate as self defence. Most other species would have to use a Rain Mask, which one of his children gives to Rayman at a later point in Rayman Revolution.

Globox is generally a warm and friendly character and a proud father of more than 650 children, though simple and very shy. Having been captured at least once in Rayman 2, he has grown an irrational fear of the Robo-Pirates, and often when he senses that they are near, he will run away and hide (notable in the Canopy), until he is sure that Rayman had destroyed them all. Similarly, he displays this fear in Rayman 3, this time of the Hoodlums and their attacks, unless he's under the influence of plum juice.

In Rayman 2, Globox speaks in broken English and has a deep voice, but in Rayman 3, his English has improved and his voice has attained a higher pitch.

Globox's personality changes between Rayman 2 Rayman 3 and Rayman Origins. While he remains Rayman's daft sidekick in these games, in Rayman 2 he is potrayed as a dim but loveable and well-meaning character, whereas in Rayman 3 he seems more articulate but less intelligent, and acts rude at times. While very cowardly in Rayman 2, in Globox can become very rash while under the influence of Plum Juice in Rayman 3, yelling drunken taunts at the Hoodlums and sometimes standing defiantly in their line of fire (though he is never hurt by this). In Rayman Origins, his personality changes almost completely, acting more dimwitted, cheerful, and no longer cowardly.

Globox and his family were created by Polokus as part of the non-magical People, as a result of the spirit's sense of humour. He was originally called "Globber", a name that he has now passed down to one of his children in order to rename himself. Together with his mate, Uglette, he is the proud father of 650 small children at the last count. In Rayman Revolution, it was revealed that he and his family live in a tree house near the Canopy, though in the Dreamcast version of Rayman 2, they live in a secret location hidden in the Woods of Light, called the Globox Village. 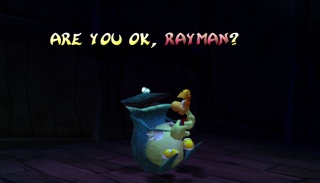 Globox's story begins even before the game starts, where he is by Rayman's side among an ambush in the Great Forest. There, he doesn't put up much of a fight, but he helps by rusting up a few Pirates with his Rain Dance. Rayman praises his efforts, but gets distracted by Ly's telepathy, and gets captured, leaving Globox with no choice but to be sent by his limbless friend to find Ly in person and ask for further instructions. Ly gives him a Silver Lum, and then gets captured himself.

On the Buccaneer, Globox is thrown into the same cell as Rayman, and give him the Silver Lum, which allows him to shoot with his fist. Rayman tries it on a metal grate covering an air vent, and together, he and Globox goes down the chute. However, Globox knocks Rayman off the edge, and they become separated. From this point until he meets Sssssam in the Marshes of Awakening, who tells him that Globox has been taken beyond the Marshes, the limbless hero doesn't know where his amphibious friend had got to.

Later in the game, Globox is recaptured by the Robo-Pirates and is imprisoned in the Canopy. A sign there refers to him as ‘Public Enemy #2’. Once Rayman frees him, Globox joins him for the remainder of the level. He puts his Rain Dance to good use by growing plants, putting out fires and short-circuiting electric bars. However, upon the sight of a Warship, Globox runs back the way they came into a cave. Rayman goes back to reassure his friend that there's nothing to be scared of, and then, Globox remembers to give him a Silver Lum which upgrades the power of his magic fist. At the end of the level, Globox takes leave of Rayman, insisting that he must go and find his wife, Uglette.

Unfortunately, Globox gets captured again at the near end of the game, this time used as live bait to lure Rayman to the Crow's Nest. When he gets here, Razorbeard shoots him, but misses and hits the pole that hangs Globox upside down, but he insists that Rayman should carry on fighting the Grolgoth rather than saving him. It is unknown how he got down after the Crow's Nest fell apart, but whatever happens, he ends up back on the ground safely by the time he and his friends mourn their hero after the Buccaneer explodes, until Rayman turns up alive.

Though Globox's primary roles in Revolution were similar to those in Rayman 2, a few new elements were added. In Revolution, Globox does not grant Rayman the ability to shoot his Magic Fist, but instead simply allows Rayman to punch. Globox's house, children, and relation with Uglette are depicted in a larger scale; one of his daughters is an important character later in the game, Uglette is constantly seen worrying about Globox, and his cliffside house's acres of land are the setting for the middle third of the game. Globox joins Rayman on a few occasions in a fashion similar to Clark or Globox's role in Rayman 3: Hoodlum Havoc. Globox must be taken past Whale Bay to use his Rain Dance so as to enable entry to the Sanctuary of Stone and Fire.

In Rayman M, Rayman Arena and Rayman Rush, Globox is one of the initially available characters.

Globox remains physically similar to his original appearance, though had become a comedic sidekick for this next appearance. Globox plays a major plot role, having accidentally swallowed André and having to find a doctor who would find a way to remove André from Globox during the first half of the game. During this time, Globox is forced by André to drink Plum Juice, despite his allergies, and during a somewhat drunken state he gains special abilities for short periods of time that are needed to progress Rayman through the game or move Globox forward through the level (by floating). Through the second half he plays a lesser role, though tends to follow Rayman on their journey, ocasionally bringing up the odd surprise. He is notably voice acted by actor John Leguizamo.

In Rayman: Hoodlums' Revenge, Globox follows Rayman through much of the game, similar to Rayman 3. Globox is also a playable character in some levels. Often times there will be a puzzle-like sequence of events that requires the player to use both Rayman and Globox to move forward in the level. As Andre has been consumed once more, Globox can use the effects of plum juice to do certain things to move on in the stage, such as breaking metal bars. 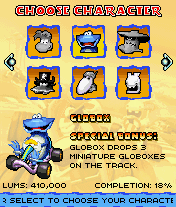 Globox as he appears in Rayman Kart

Globox makes a brief cameo appearence at the beginning of the Game Boy Advance version of Rayman Raving Rabbids. He is seen in the Agony jails where he thanks Rayman to have freed him.

File:Globox.gif
Globox as he appears in Rayman 3: Hoodlum Havoc

Globox makes an appearence as a playable character in Rayman Kart. He is unlocked from the start and his special power is to drop three baby Globoxes on the track.

Globox is set to appear in the upcoming Rayman Origins. He will be a playable character in the game's co-op mode. The trailer shows Rayman's first meeting with Globox, prior to the events of Rayman 1. It is said that Globox is Rayman's ‘double, his blood brother, his id’. Origins reveals that Globox is one of a group of beings known as the Red Wizards; like the others, Globox was originally red, but he became blue when attacked by blue mosquitoes.