Difference between revisions of "Golem"

A gigantic statue of living rock, the Golem is only ever seen from the chest up. Fought inside a chamber in the mountain, the Golem is limited to moving his body up and down, using the Darkroots that surround him as his main weapon to attack the heroes. He is essentially an oversized version of the stone men, much like Mr Stone in the original Rayman game. The connection between the two bosses is unclear. It is now known if he has any allegiance with the Livid Dead or the Magician. Once he is defeated, he simply falls to pieces, much like the bosses in the original game; unlike the other Rayman Origins bosses, he does not revert to a benevolent form. 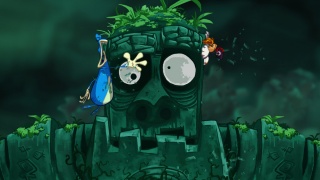 The early version of the Golem, as seen in the E3 trailer.
Retrieved from "https://www.raymanpc.com/wiki/script-en/index.php?title=Golem&oldid=31102"
Categories: