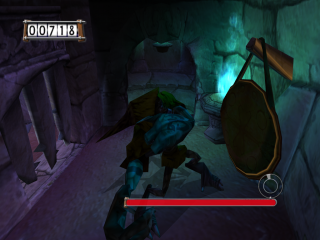 A Knaaren striking a gong in Rayman 3.

The Gong emits a sound like the frightened scream of a helpless baby Glute. The Knaarens, who're always keen to punish the little ones, can't resist its call.
—Official description, Rayman 3: Hoodlum Havoc

Gongs are instruments found in Rayman 3, as well as creatures that appears in Rayman Origins and the Back to Origins painting in Rayman Legends.

Gongs can be found in the tunnels beneath the Desert of the Knaaren. When hit with a Shock Rocket, the gong makes a sound that is said to imitate a frightened scream of a helpless baby Glute. The Knaaren that dwell in the tunnels are unable to resist this noise and immediately run towards the gong to find the baby and punish it. This gives Rayman a chance to run past the distracted Knaaren and enter the next part of the level.

In Rayman Origins and Rayman Legends 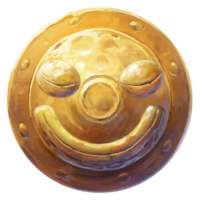 A sleeping gong, as it appears in Rayman Origins. 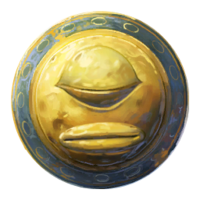 A cyclops gong, as it appears in Rayman Origins.

In Rayman Origins and the Back to Origins painting in Rayman Legends, several gongs can be found in the Desert of Dijiridoos. When the heroes hit a smiley gong, it creates a circular sound wave, driving away dense swarms of flies and temporarily opening up paths which can then be traversed. When heroes hit a cyclops gong, it creates a force-field around them, a particular circular sound wave that follows them for a short time; it will slowly decrease in size until it vanishes, rendering the heroes vulnerable to flies again.