Gorilla Pirates [1] are powerful Robo-Pirates which appear in Rayman 2. They are notable for being near-invincible. They also make a cameo appearance on a production line in the Electric Final race course in Rayman M and, together with many other Robo-Pirates, in the Hoodlum Headquarters in Rayman 3.

In many ways, Gorilla Pirates seem like a stereotypical first-mate pirate, comparable in apparel to Mr Smee from Disney's Peter Pan. Gorilla Pirates are brainless and exist only to clobber intruders in their territory. They are short, stubby, and carry a hunchback. They are seen wearing a blue and white striped shirt. They walk on all fours like a gorilla. According to the official Rayman 2 website, their IQ is somewhere between that of a deep-sea sponge and a slice of toast. 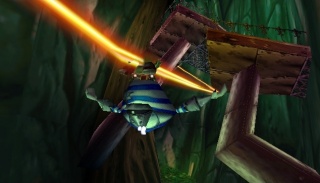 Gorilla Pirates attack in only one way: they charge suddenly, run over their foe, and run away. Unfortunately for them, their lack of intelligence does not stop them where their foe jumps, and so if somebody such as Rayman jumps right next to a cliff, the Gorilla Pirate is sure to fall a great distance and explode.

Another way to neutralise a Gorilla Pirate is to incapacitate them by lobbing a plum at its head. This technique can also be used to gain access to otherwise unreachable ledges, as it immobilises the Gorilla Pirate, allowing his plum-encased head to be used as a platform. Both of these techniques were previously available and useful when applied to the Livingstones in the original Rayman game.