Difference between revisions of "Great Protoon" 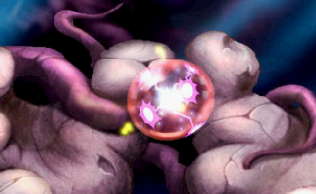 The Great Protoon in its original location, as show in the original Rayman game's intro sequence. 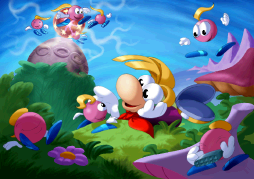 Electoons visibly gravitating around the Great Protoon, as seen in the intro sequence of the original Rayman game (Atari Jaguar version).

The Great Protoon is a mystical pink orb of light which acts as the source of all energy in Rayman's world. Appearing only in the original Rayman game, it maintains the harmony between nature and the people of the world. The Electoons gravitate around it, and seem to have some sort of symbiotic relationship with it – without it, they scatter all over the world, and the balance of harmony is lost. 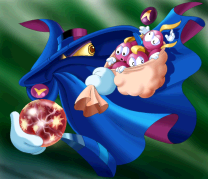 Mr Dark flees with the Great Protoon and a sackful of helpless Electoons.

Because of its immense power, the Great Protoon becomes the target of Mr Dark's evil scheme in the original game. Mr Dark steals the Protoon from its resting place between two carven stone hands, overpowering Betilla the Fairy in order to do so. The Electoons become scattered as a result of the Protoon's displacement, and are subsequently captured by Mr Dark's minions and imprisoned in cages. Rayman's primary objectives during the game are to recover the Great Protoon and free the Electoons. When Rayman finally defeats Mr Dark in his Château, the game ends without showing the Great Protoon's recovery. However, an epilogue screen indicates that the Great Protoon was indeed rescued.

Other games in the series

The Heart of the World may be the Great Protoon under another name; both are pink orbs of energy, both serve the same function and both play very similar roles in their respective games.

In Rayman 2 and Rayman 3, the Great Protoon is replaced by the Heart of the World, a glowing pink sphere comprised of 1000 Yellow Lums. In addition to their similar appearance, the two objects serve the same function (the provision of energy and harmony throughout the world), and the catastrophic consequences which result when they come under attack (the proliferation of freaks and hostile characters) is also the same. It has been speculated that the Great Protoon and the Heart of the World are actually the same object, only under different names. The way in which the Heart appears to be comprised of many bodies of light while the Great Protoon seemed to contain only a few may be a result of its destruction at the hands of the Robo-Pirate army and its subsequent reconstruction by the Teensies. In Rayman Origins, Polokus tells the First Grand Minimus to take a holiday from guarding the Heart of the World.