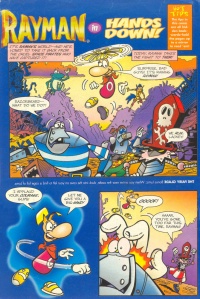 The first page of this one-off comic

Rayman in Hands Down! was a one-off, four-page comic that was based on Rayman 2: The Great Escape. It was currently known to have been published in the United States in a children's comic called Disney Adventures in 2000, and in the United Kingdom in a similar magazine called Disney's Big Time in 2001. It typically had a generic cartoon look that appears to have been heavily referenced from several concept artworks for the game, and used cheesy hand-related punchlines. No other official Rayman comics have been published or discovered ever since.

Rayman, Ly and Globox arrive to fight Admiral Razorbeard and his lackey within a vast junkyard. Angry with his lackey gradually being defeated, Razorbeard withdraws a magic cage which zaps Globox and traps him. Ly then comes up with a plan to free Globox, which involves lifting Rayman and making him bounce back into action. He throws his fist to attack the pirates as well as firing it at the magic cage until it finds its weakest spot, eventually freeing Globox, who then uses his Rain Dance to try and make the pirates rust. They retreat from the rain, leaving Rayman and his friends to claim victory.

All the hidden tips in the story are written backwards, one on each of the four pages, and the reader has to hold the book up to a mirror to read them.

Bonus Lums: When you arrive near the castle, duck into the cave on your left to find a cage full of Lums.

Secret Passage: When you're on the bridge riding the missile with legs, use the turbo to speed up. Move left and you'll notice a secret passage on a broken bridge. Take it to find a bunch of Red Lums for extra life points!

Short Cut: After the first check point, move the two planks of wood in front of you, then jump through the net above you to find a short cut!

The Sanctuary of Water and Ice

Trick Style Moves: When you face the final Boss of the world, dodge the Boss's shots by moving forwards and catching the Lums sideways!

The following people were credited when the comic was published in the United States. For an unknown reason, they were not credited in the UK edition.[1]