Difference between revisions of "Heart" 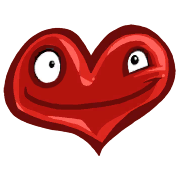 A heart, as it appears in Rayman Origins.

Hearts are items found in Rayman Origins, Rayman Jungle Run, Rayman Legends and Rayman Fiesta Run, in which they are used to protect the players from damage inflicted by enemies and other dangerous obstacles. While the heroes normally take only one hit to be bubblized, the protection of the heart grants them a second opportunity to survive, instead of having to return to the last checkpoint. The only case this does not apply is if the hero falls down a pit. Hearts also appear as Rayman's health in the mobile phone version of Rayman Raving Rabbids. 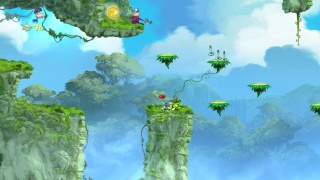 Hearts are red floating creatures, which only show their smiley face when a player acquires them; then they follow the player, until something or someone breaks it, producing a glassy noise. Only one heart per character can be held on to. In a single player game, if a heart is picked up by a character that already has one, they will receive a bonus of five Lums, which can't be affected by the Lum King's song. In a multiplayer mode, this heart will be passed on to another character if they do not have one; however, by default, the heart gives five Lums to the player who collected it if every player on-screen has a heart already. Hearts can either be found in a phial, which must be broken in order to obtain it, or in some cases in Rayman Origins, in a bubble, should the player unearth one hidden in a spot that emits tiny bubbles (regularly, nenuphars, bubblebushes or bulb-o-Lums). Hearts seem to be a replacement to the scrapped life bar, which highly resembled the life bar from the original Rayman game.

During early development, a series of NFC Toys were designed for Rayman Legends. On the first leaked trailer, a toy of a heart was spotted. This collectable toy was supposed to interacts with the Wii U version of the game by placing it on the controller's screen, generating a rain of hearts on the level. The purpose of this remains unknown, though it seems to distract the enemies and facilitate the adventure; it is also presumed that it was supposed to bring temporal invincibility. Although the toys were cancelled, the hearts still make an appearance in the game, assuming the exact same role from the previous game.

Golden hearts are power-ups in Rayman Fiesta Run which act like normal red hearts. The only difference is that they protect the hero from two hits, rather than one.