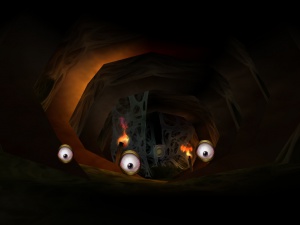 Jumping eyes at the entrance to the Cave of Bad Dreams.

Jumping eyes are some kind of static enemy, which don't move or attack and just stand in one place, jumping endlessly with sound of bounding ball. They can hurt Rayman, if he will come too close to them. He can destroy them by one hit.

They appears on the PC version of Rayman 2: The Great Escape and probably on the PS1 version - in PS2 version they are deleted. We can meet them only two times, in front of entrance to the Cave of Bad Dreams and in first room of the Sanctuary of Rock and Lava (in place, where we meet Chenille in PS2 version). They also appear on the big root before reaching entrance to the Sanctuary of Rock and Lava.