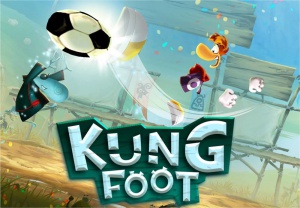 For the minigame to start the players have to chose their teams. There are two teams available; the blue and the red, with the red team being the Lividstones and the blue being the toads. To choose a team, the players have to hang in one of the four rings available. There has to be a minimum of two players, with the maximum being three players in each team. Once the teams have been chosen, the game begins by the soccer ball being thrown in to the middle of the arena. The players can then hit it, similarly to the soccer balls in several of the game's rescue missions, to have it bounce in the opposite direction. The goal is to get it into the other team's goal. The game goes on for two minutes and the winner is decided by the number of goals scored. There is no reward for winning due to it only being a friendly competition.