A statue of the Leptys, as seen in the tunnels beneath the Desert of the Knaaren

When Rayman defeats Gumsi's champion Knaaren warrior, Reflux, in the arena, Gumsi rewards Rayman by invoking the Leptys and giving Rayman a fraction of its power: the power to turn Black Lums back into Red Lums with a Grimace.

The Leptys itself never truly appears, but a huge statue of it it seen in the Desert of the Knaaren. The statue resembles an eagle-like bird. After Reflux invokes the Leptys and becomes the final boss of Rayman 3: Hoodlum Havoc, he takes on a somewhat bird-like appearance, even growing wings. It seems that merely possessing the Sceptre is not enough to access all of the Leptys's powers; Reflux embeds the Sceptre into the flesh of his own back in order to grow gigantic.

The Leptys is worshipped by the Knaaren in the Tower of the Leptys, which they seemingly built as a temple to him. When the Leptys is invoked at the top of the tower, a bizarre cloud formation appears in the sky over it. Rayman and Globox chase Reflux into this, and find themselves in an alien landscape, surrounded by strange clouds and eyes on stalks. It is implied that this area explodes once Leptys-Reflux is defeated.

A figure was made shortly after Rayman 3's release. It depicts Rayman climbing a statue of the Leptys and looking around. It is a rare piece and is most commonly on display in gaming shops, and is rarely for sale. 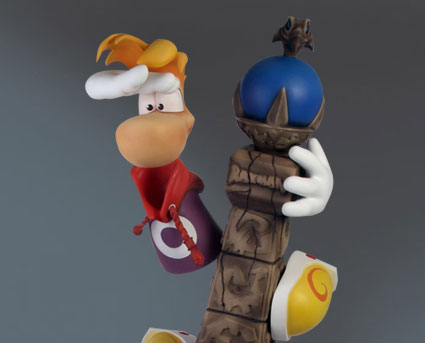