Lucky Tickets are items that are earned in Rayman Legends and Rayman Adventures. They serve as a means to unlock certain elements of the games in which they feature in. 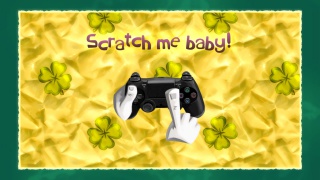 On the PlayStation 4 version the tickets are scratched using the touchpad.

Lucky tickets bear the image of a shamrock. When they are accessed, each one is then divided into six parts, each of those representing an image of these prizes. Matching three of an image will unlock that which the image represents, however, it is possible to obtain tickets with more than three Lum images, the prizes for obtaining the different amounts are noted below:

Other items which are unlocked are Teensies, who will be added to the player's total count of freed Teensies. The player can also unlock levels in the Back to Origins mode, where they are able to play levels from Rayman Origins. Creatures are exclusively obtained through Lucky Tickets, and once unlocked, can be found in the Creatures painting in the Main Gallery. In the Nintendo Switch version the player can get more tickets from the added Murfy's Touch levels. The total amount of tickets which can be scratched is however the same, meaning that the player can end up with tickets which can't be scratched near the end.

A Lucky Ticket as it appears in Rayman Adventures.

Lucky Tickets make a return in Rayman Adventures and introduce a new kind of Lucky Ticket which is the Golden Lucky Tickets. The appearance of the Lucky Ticket is unchanged. The appearance of the Golden Lucky Ticket is the same as a normal one, but golden. These tickets do contain different prizes though, but the way to obtain them is still similar. Match at least three of the same images and win the prize represented in the images. Though none of the prizes can be restricted to just being three images (besides eggs), so there is a chance of having an entire Lucky Ticket containing only one prize, but in result having the amount of it greater. There are many ways of obtaining Lucky Tickets such as; buying them with Gems, reuniting Incrediball families, completing achievements, winning them in other Lucky Tickets and most recently doing Daily Missions. Though as of the 1.4.0 update, you could no longer buy regular Lucky Tickets, leaving only the option to buy Golden Tickets.

For each event in the game, there are special event-tickets which can be obtained using the collectibles of the event. These tickets act similarly to regular tickets, although they can also contain the events collectibles and the special event eggs with seasonal Incrediballs.