Lums, as they appear in Rayman Origins

The Lums in Rayman Origins, Rayman Jungle Run, Rayman Legends, Rayman Fiesta Run and Rayman Adventures are beings of pure energy that can be collected by the heroes. They do not fit into the system of colours used for the Lums in the other games of the Rayman series. These Lums are shown as sentient creatures with arms, legs, wings, eyes and mouths; unlike other games where Lums are simply orbs of energy with wings. 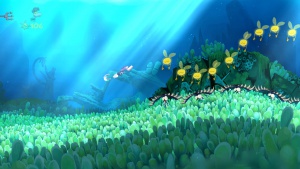 In Rayman Jungle Run there are a total of 100 Lums to be found in each level. The player is rewarded with a tooth once all Lums are collected in a level. 5 of these teeth will unlock the worlds Land of the Livid Dead level. The more Lums the player collects, the more artwork is revealed in the menu. Originally there was a bug causing Lums not to be reset correctly upon replaying a level, thus making it possibly to obtain more than 100 Lums in a level. This has since been fixed.

During the development of the Wii U version of the game, videos revealed that Lums could be painted purple by Murfy, adding not only the regular amount of Lums for Rayman's score, but also the exact same amount of Lums for Murfy's score. This duplicated the final score of Lums, which were later used to unlock bonuses. Unlike the red colour generated by the Lum Kings, the purple colour of Murfy's paint was activated with the touchscreen, and appeared to be permanent, giving Rayman enough time to take them all.

Lums also have a significant larger role here as they're used to determine the players score in many of the challenges.