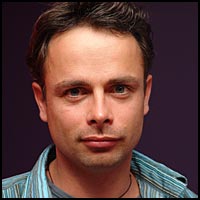 In late May 2010, rumours surfaced from French video game website Wootgaming that Beyond Good & Evil 2 had been cancelled, and Ancel had left Ubisoft to found his own independent studio. Ubisoft soon issued denials of this rumour. However, friend of Ancel and game developer Nicolas Choukron left a comment on an unofficial Michel Ancel Facebook fanpage[1] saying that Ancel had formed a new studio which was a subsidiary of Ubisoft, as the Montpellier team was too large. Choukroun also revealed that Ancel and his new studio were working on a new Rayman game. This rumour has been proven correct, after Ubisoft unveiled a new Rayman project, entitled Rayman Origins. In 2010, Ubisoft announced Rayman Origins, first an episodic video game designed by Michel Ancel and developed by a small team of five people, but then it was announced that it transformed into a full game. The title uses the UBIart Framework developed by Ubisoft Montpellier and Ancel. UBIart is a developer platform that allows artists and animators to easily create content and use it in an interactive environment. The engine is optimized for HD resolutions and is capable of running games at 60 frames per second in 1920x1080 resolution. The UBIart tools were set to be released as open-source software in 2011, but at the time of this writing, no such release has occurred.

Speaking at Montpellier in Game conference in June 2010, Ancel revealed that he is developing similar tools to create Beyond Good & Evil 2 with a very small team to preserve its "artistic spirit".[2] Ancel is experimenting with different development techniques and tools. He claims these tools are getting similar to those used by Weta Digital.

Ancel is also recognized as one of the best game designers in IGN's Top 100 Game Creators, ranking 24th out of 100.[3]

On October 12, 2017, Ancel posted on his Instagram account that he is very interested in making the 'fourth' Rayman adventure,[4] suggesting of a future revival of the prototype or the then-planned original fourth game that was cancelled. Though he does mention that it will most likely happen once both Wild and Beyond Good and Evil 2 are done.

Ancel announced he was leaving the games industry in September 2020 to spend time on a wildlife sanctuary. He stated that his two current projects, Beyond Good & Evil 2 and Wild, were in capable hands with his departure.

On March 13, 2006, Ancel, along with Mario creator Shigeru Miyamoto and Alone in the Dark and Little Big Adventure creator Frédérick Raynal, was knighted by the French Minister of Culture and Communication, Renaud Donnedieu de Vabres, as a knight of arts and literature. It was the first time that video game developers were honored with this distinction.

Ancel is also recognized as one of the best game designers in IGN's Top 100 Game Creators, ranking 24th out of 100.