Difference between revisions of "Mini Jano"

The Mini Janos (currently not an official name as of yet) are enemies that are encountered only in Rayman 2: The Great Escape. They are found mostly in the Cave of Bad Dreams, which is guarded by their much larger counterpart, Jano, though a few more appear at a certain point in the Sanctuary of Stone and Fire.

Mini Janos attack by breathing fire, and they often attempt to avoid Rayman when they look each other in the eye while attacking. Like Jano, they can dig underground, and they usually make their ambush at what seems to be a dead end, and there is usually more than one to defeat. Should they get into melee range of Rayman, they will grab him and devour him, counting as a death and respawning Rayman. If so, all of them need to be defeated in order to reveal a secret item, usually a plum or a magic sphere. 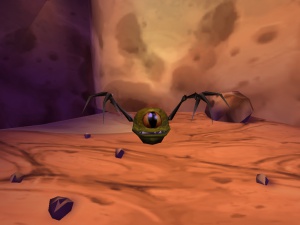