Difference between revisions of "Mosquito"

Mosquitoes, also known as Moskitoes, are a species of giant flying insect encountered frequently throughout the Rayman series. They are characterised by their huge, round eyes and prominent proboscises. Notable mosquitoes include Bzzit and Moskito.

In the original Rayman game, Rayman first encounters Bzzit the pink mosquito in Anguish Lagoon. Rayman overcomes him in a brief boss battle (which is also the very first boss battle of the series), after which Bzzit becomes upset and starts to cry. Rayman takes pity on him and cheers him up, thus the two become friends. Bzzit then allows Rayman to ride on his back during the next phase of the level. Afterwards he is not seen again, but in the Atari Jaguar version he can be seen at the end of the game (after the credits) in an artwork depicting Rayman and his friends at a party celebrating the defeat of Mr Dark, drinking what appears to be honey.

In a later level, Moskito's Nest, Rayman encounters Moskito, a purple, more powerful version of Bzzit. Moskito chases Rayman through the third phase of the level while carrying a gigantic spiky fruit. Rayman and Moskito soon go head-to-head; Moskito's attacks include Bzzit's darting and stinging movements, but Moskito incorporates a variety of spiky fruit-related attacks into his strategy. At the end of the fight, Moskito is knocked unconscious and is not seen again. 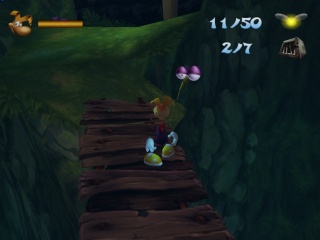 A mosquito in the Fairy Glade, as seen in the Dreamcast version of Rayman 2.

In Rayman 2, a few mosquitoes can be seen hovering quietly by themselves in the Woods of Light. They serve no purpose, other than as an Easter egg or continuity nod to the previous game. In the Dreamcast version of the game, these appearances are expanded greatly: in addition to the Woods of Light, mosquitoes now appear in the Fairy Glade, the Marshes of Awakening, the Bayou and the Sanctuary of Rock and Lava. However, neither Bzzit nor Moskito make an appearance. 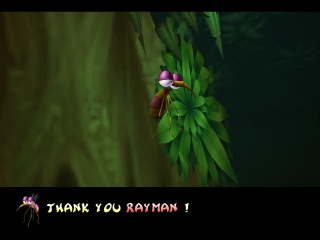 In Rayman Revolution, the expanded PlayStation 2 version of Rayman 2, the mosquito Bzzit returns and plays a role in the plot: Rayman's visit to the Bayou is now a mission to rescue Bzzit, who has been captured by the pirates and held there. Bzzit must be rescued, as he is the only one who can take Rayman to the Lost Island, which is the location of the Sanctuary of Water and Ice in this version. Once rescued, Bzzit can be found at a small boat by the Pier; in a 'ferryman'-like role reminiscent of that which he played in the first game, Bzzit brings the boat and Rayman to the Lost Island. Revolution also gives Bzzit dialogue for the first time; his voice is whiny and high-pitched. Some more light is also shed on Bzzit's personality; he is shown to be the friend of a baby Globox. 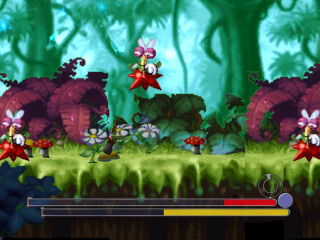 In Rayman 3, several mosquitoes appear in 2D Madness, a minigame which acts mainly as a tribute to the original Rayman game. These mosquitoes are obstacles within the level, and fly back and forth while wielding spiky fruits. None of them appear to be Bzzit or Moskito.

The type of flying Hoodlums known as Hoodstormers are an attempt by the Hoodlum army to emulate the effectiveness of mosquitoes in battle, as a form of psychological warfare. Hoodstormer pilots train in the swamplands (where mosquitoes are found consistently throughout the series) in order to learn the mosquitoes' attack pattern, as mosquitoes are looked upon as the ‘ultimate airborne annoyance’.

It's good to have a gigantic stinging insect on your side! The bug-eyed Moskito is a friend in battle. Take a wild ride with him and shoot through the Moody Clouds, where massive machines manufacture the weather. Bombard the enemy or suck them up and spit 'em back out at other bad guys.
—Official site, Rayman Origins 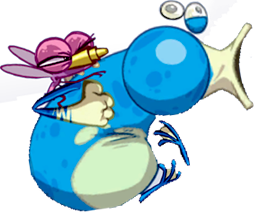 The mosquitoes also appear in Rayman Origins with redesigned appearances. They now possess visible mouths, hands, and feet and are colored purple and pink as opposed to yellow and grey. They usually appear in the last levels of each world (minus the revisted worlds and Mystical Pique) where they will offer Rayman and his friends rides to the next world. Their primary weapon is their proboscises which they can either shoot out of (similar to Bzzit in the Atari Jaguar version of the original Rayman) or use to inhale enemies then shoot them out. If the player is using Globox, Glombrox or Red Globox, a baby mosquito carries him as opposed to letting him ride on his back due his weight, temporarily enabling Globox to shoot out of his mouth and inhale enemies. They sometimes appear in hidden rooms with Electoon cages as well.

At one point, an enemy known as the Unibrow Steppe Moskito was considered, but it was not included in the final game.

The mosquitoes in Rayman Origins are referred to as males, despite having visible teeth, which only female mosquitoes possess in real life. 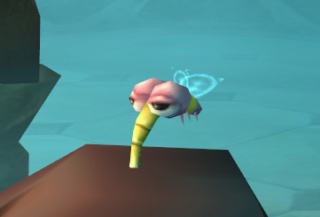 A mosquito makes a cameo appearance in Michel Ancel's Beyond Good & Evil.

The mosquitoes also make a cameo appearance in Beyond Good & Evil, another Ubisoft game designed by Michel Ancel, the creator of Rayman. In the game, a pink mosquito can be seen on the nose of a dead cow in a factory. If the player takes a photograph of the mosquito, the name of its species is revealed as Aedes Raymanis, meaning Fly from Rayman.

Bzzit makes a cameo appearance in the fourth volume of the Rabbids' comic book, Gribouillages.