Mr Dark's Dare (French: Le Défi de Mr Dark – The Challenge of Mr Dark) is the first and only level of Candy Château, the sixth and final world of the original Rayman game. The first time it is played, it consists of four parts. After that, it consists of zero; selecting the level from the world map after completing it will show the player the happy-ending screen, before going straight to the credits. However, in the Game Boy Advance and DSiWare versions, the first 3 parts of the level are playable even after playing through the level once. In the DSiWare version, it is possibly due to the fact that the credits are part of the pause menu. In the Atari Jaguar version, it is known as Mr Dark's Château.

In this phase, Rayman must slide across slippery hills of whipped cream while riding a frying pan, making sure to avoid gaps and sweet colourful lakes.

In the Atari Jaguar version, this level's layout is completely different. Instead of riding on the frying pan, Rayman has to follow some Tings that form arrows, most of which lead to dead ends but make mostly clouds appear. He will often have to punch Swiss army knives to get past them unhurt, and duck under corkscrews while riding these clouds. Both the Swiss army knives and the corkscrews also appear in Rayman Designer.

Rayman is pursued by Bad Rayman.

In this level, Mr Dark casts a spell on Rayman and summons Bad Rayman, his evil clone, who copies every single move he makes. He then has to reach the exit sign without touching him. The level has a bunch of small dead-end areas with extra lives and other power-ups. Although they are not hard to find, or hard to get to, they are made difficult by the fact that Rayman is constantly being chased. It is however possibly to skip the trigger, known as a gendoor, which spawns Mr Dark. This can be done by running from the far left and jumping over the gendoor with his helicopter straight away. This method is quite hard to perform and is not possible in the PlayStation version. In the Game Boy Advance version, the gendoor is visible, being displayed as a small sparkle, making it much easier timing the jump.

Rayman can cross the sweet colorful lakes by jumping on the tiny floating bits of icing.

Again, this level is completely different in the Atari Jaguar version, and as such, Bad Rayman does not appear at all. Instead Rayman can walk around without the fear of being stalked by a deadly spell, but there are still many dangers that lurk in the area.

Rayman is forced to run by Mr Dark.

Mr Dark then casts several spells on Rayman. The first one reverses his controls, meaning he will be walking left if the player wants to go right, and vice versa. Several clowns stand in his way to bring even more confusion. At a certain point, the spell will break, and Mr Dark will cast a new one, which forces Rayman to run until this wears off, without the possibility of using his helicopter hair. At the very end of the level, he will cast a last spell, which steals Rayman's telescopic fist.

This part remains the same in the Atari Jaguar version, with few minor changes.

The final battle against Mr Dark. 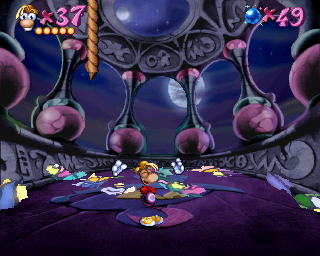 The stained glass windows shatter after Mr Dark is defeated in the Sega Saturn version.

Rayman has to battle Mr Dark. Once completed, this level cannot be played again except in the Game Boy Advance and DSiWare versions.

The Sega Saturn version is unique in that it features some effects not found in any other version: during the phase in which Mr Dark shoots fireballs at Rayman, flames appear to be burning behind the stained glass windows representing the game's bosses in the background, illuminating them from behind. During the phases against the various creatures, a yellow light goes back and forth from left to right and right to left behind those same stained glass windows. Every time one of the creatures is hit by Rayman, the stained glass windows representing the bosses that that particular creature is made up of start blinking with a white light for a few seconds. Once all three creatures have been defeated, all five of the stained glass windows blink for a few seconds and then shatter into pieces as Rayman does his celebration dance. The screen then briefly fades to black and resumes, and the words "You have done it! You have saved the world!" appear in the middle of the screen, while Rayman does a unique dance in which he strikes several poses not seen anywhere else in the game.

This part is also very different in the Atari Jaguar version. Mr Dark has 12 health points rather than 24, he attacks Rayman with fireballs for a little while longer, he only morphs into two creatures (Mr Skops/Mr Stone and Bzzit/Mr Sax/Space Mama) instead of three and the creatures sweat and walk/jump away when they are damaged enough. When Mr Dark is defeated, Rayman does his victory pose and while doing so, many shining Electoon faces identical to the ones seen on the medallions appear around him, with a piece of colourful text saying "Well done".

Below is a comparison of the arena background between the different releases.