Difference between revisions of "Mr Dark"

Mr. Dark is the main antagonist and the final boss in Rayman, located in Candy Château, in Mr. Dark's Dare. He is a mysterious being that steals the Great Protoon because of its immense power, causing the world to lose its natural stability. He also uses his powers to defeat Betilla the Fairy, who tries to defend the Great Protoon but is overpowered. At a later point of the game, Mr. Dark kidnaps her and traps her in a crystal ball.

As the final boss in Rayman

Mr. Dark fighting Rayman at the end of the original game

Before fighting Rayman, Mr. Dark casts strange spells on him as he makes progress through Candy Château, such as creating Bad Rayman, reversing Rayman's movements, making him run uncontrollably and eventually stealing his telescopic fist. Following this, by the time Rayman reaches his hideout, he tries to destroy him by trapping him between deadly walls of fire and throws fire balls at him. When his situation seems desperate, a group of Electoons rescue Rayman by giving him back his telescopic fist. The final battle then begins, and Mr. Dark transforms himself into three different forms.

The first transformation of Mr. Dark is a hybrid of Mr. Stone and Mr. Skops. His appearance is Mr. Stone's body, feet and right hand, but has Mr. Skops' head and claw. His only attack consists in hurling his claw at Rayman, which he can jump over and punch him in his face. If Rayman attempts to punch him too early, Mr. Dark will block his face with his claw. It is possible, with a certain timing and dexterity, to hit him twice per turn.

After he has suffered eight blows in the face, Mr. Dark then appears as two beings of the same hybrid, made of Moskito's body to his original size, and Space Mama's head, feet and hands in her first appearance, whilst also always holding her rolling pin, which fires out lasers like in her second appearance. Their only attack is shooting at Rayman, which he can jump over or duck under. If both of them shoot at the same height, the lasers will touch each other, morph into one laser, and come down towards the ground, which can be very hard to dodge for Rayman if he is ducking. If Rayman is ducking after they have shot, they will wait until he stands up. When Rayman gets the chance, he can punch either one of the two. If a laser hits the other hybrid, Mr. Dark will also be hurt.

When Rayman has hit them in total of eight blows, Mr. Dark transforms himself into a hybrid of Mr. Sax, Space Mama, and Moskito. His appearance is Space Mama's body, Mr. Sax's feet and hands and Moskito's head. Rayman has shrunk to the same size he would have with a flying blue elf. As he tries to stomp him, Rayman must use his running ability to avoid getting squashed. If he makes it across, when the hybrid hits the ground, Rayman will fly into the air, which will give him a chance punch him in the face, the only part where he can get hurt.

Once his last transformation has suffered eight punches, Mr. Dark leaves the battlefield and flees, as Rayman returns to normal size. The ending picture then shows that everything has returned to normal.

As the final boss in the GBC version of Rayman

Mr. Dark as he appears in the the GBC version of Rayman

In the Game Boy Color release of Rayman, Mr. Dark has imprisoned the Toons and uses their power for himself, throwing the world into darkness and chaos. Unlike the original, he does not transform himself when he engages in a final boss battle with Rayman. In between each level he can also be seen watching Rayman though a crystal ball.

In Arcane Forest, he casts two spells on Rayman, the first one summoning Bad Rayman, and the second one reversing Rayman's controls.

The final battle starts out with Mr. Dark shielding himself from Rayman's fist with three bubble-like balls. Then, he slowly rises up, and when he is off screen, he rains fire upon him from above. After ten to fifteen fire balls are dropped, he descends back down to the stage, while still having the shield around himself, and turns into a ball. While in ball form, he randomly floats around the stage trying to ram Rayman. His objective is to hit him while he is in ball form three times. But as he hits him, he gets smaller and smaller, and becomes harder to hit. After hitting him three times, a heart appears at the top of the stage so he can replenish his health. Mr. Dark turns back to normal, and then he floats off screen again.

This time, he throws ten meteors at him, two at a time. Then, he does the same routine as before: he comes back down, and turns into a ball. But this time, he will stay in ball form for a shorter period than before, and if Rayman can't manage to hit him three times within the time limit, he will turn back to normal and float back up into the sky to throw meteors at him again. If Rayman does hit him three times, a heart will appear once again, and he will rise back up into the sky to unleash his final attack.

This time, he shoots sixteen bolts of lightning. They are shot at the step he was just above on the stage, and can be easily avoided by using the Helicopter to hover over a lower step for a short time. After the sixteen bolts of lightning are shot, he turns back into ball form. Then, the time he is in ball form for even shorter. But if Rayman manages to hit him three times before he turns back to normal, he has beaten him. He turns back to normal form, burns up, and a spirit shape appears, then he completely fades from existence.

As the main antagonist in Rayman Junior 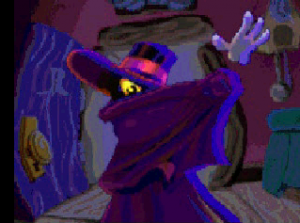 Mr. Dark also appears in the educational version of Rayman, Rayman Junior, in which he steals the Magic Book of Knowledge from the Magician and destroys a map to his hideout in Candy Château. He casts the same spells on Rayman as he did in the original game, but due to the nature of the game being educational, he doesn't fight as a final boss at all. Once Rayman has solved the riddles on the parchment showing the way to his hideout and been through his spells, Mr. Dark doesn't appear any more and Rayman eventually finds the Book of Knowledge.