Mr Stone's Peaks (French: Les Cimes de Mr Stone – The Peaks of Mr Stone) is the third and last level of the Blue Mountains, the third world of the original Rayman game. It consists of six parts the first time it is visited, and only four when replayed, as Rayman battles Mr Stone in the second-last part and receives a power from Betilla the Fairy in the final part.

Rayman meets the Musician, who is upset and wants someone to rescue his guitar which is squashed under a rock. In return for making a new one out of the boulder, the Musician gives him a flask of Super Helicopter which enables him to fly though this spiny level. 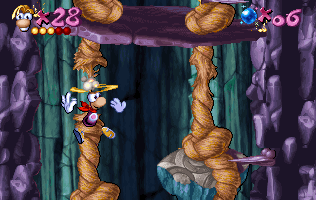 Rayman must use his helicopter hair to cut these ropes

Rayman is flying in a chasm, and is caught between the water and a giant slate that is being pulled down with two rocks tied with ropes. He has to use his helicopter to cut the ropes and stop the slate. The water then drains itself through a hole in the ground, making it safe for him to land and fly up the rocks to reach the exit. The Super Helicopter won't be available for a long while after this. This level is not included in the Atari Jaguar version. 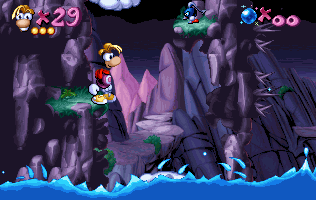 The water is rising

The waters flood in this area at two points, so Rayman has to avoid it by climbing up some chasms. When he is safe, he mostly has to stand on moving clouds to get across the sky. 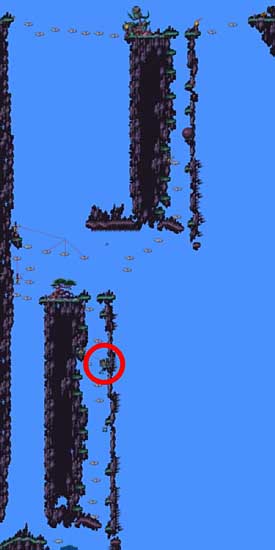 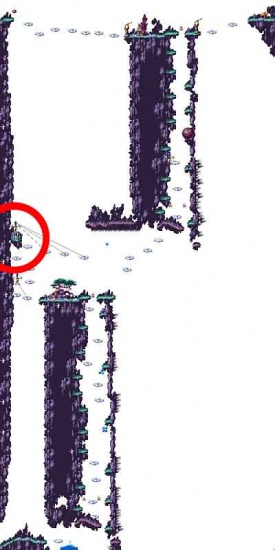 Rayman must be careful as there are more snowy platforms and many traps, including groups of stakes. 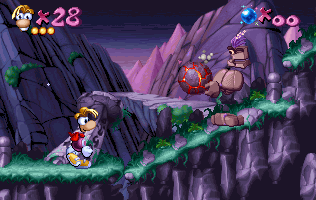 A stone man about to throw a lava rock at Rayman 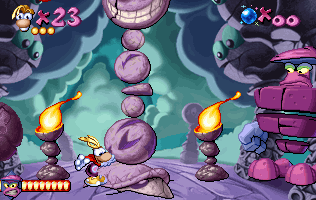 Rayman must battle Mr Stone. Like the other battles, this part cannot be replayed once the level is completed. 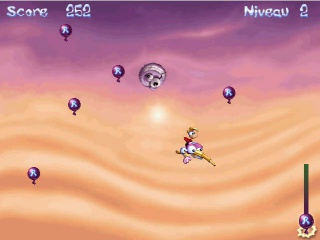 Rayman is given his fifth power by Betilla the Fairy

Betilla the Fairy appears and grants Rayman the power to run. Like the other Betilla sections, this part can only be accessed on the player's first playthrough.