"Figures. They're raiding the Fairy Council! Enough is enough. I was told that after Rayman 2 I'd be cast as a tormented artist who falls for a girl with great big... uh, eyes. And here I am, playing sidekick again in a low-budget flick. Yeesh!" - Murfy, Rayman 3: Hoodlum Havoc.

Murfy is a character who made his debut in Rayman 2: The Great Escape, and later appears in Rayman 3: Hoodlum Havoc. He serves as a flying encyclopedia, and it is his job to provide as much information about the world to Rayman as he can, as well as teaching him how to train and perform his moves. In the PlayStation version of Rayman 2 he does not do this, as it seems that a number of his kind are prisoners found in cages.

Murfy is a small flying creature with a green head, and despite his frog-like appearance, he is actually a greenbottle, a sort of fly, as revealed in the instruction booklet of Rayman 3. He always sports a huge cheesy grin showing large teeth, and is always dressed in green, yellow and purple clothes, almost identical of that of the Grand Minimus Teensies. In his appearance in Rayman 3 he had undergone a number of changes, such as his hands and eyes which are now much bigger than in Rayman 2, and his wings have become more fly-like. His clothes have also been slightly changed, notably his shoes which are elf-like. He also appears to have fingers and legs now, unlike the previous game. 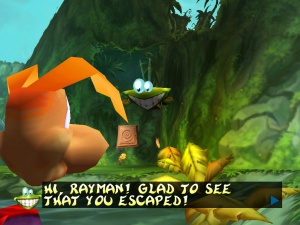 In Rayman 2 Murfy seems an innocent character that plays as a guide of Rayman, giving him instructions on how to pull off his moves while going through the Woods of Light. All around the world there are Stones of Thought. If Rayman stands next to one of these for a while, Murfy will come back to him and repeat his instructions.

Murfy's job as an instructor is a little more looked into at the beginning of Rayman Revolution, as there is an extra stage after the Woods of Light in which he teaches Rayman how to swim and how to shoot, using a scarecrow as his first target. 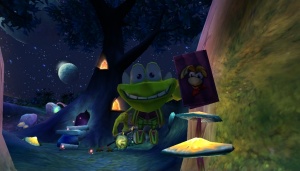 Murfy later appears in Rayman 3, and this time he carries a manual (a purple booklet with a picture of the original Rayman's face on it), which he reads from instead of passing his own knowledge to Rayman. He develops a more cocky personality than before, and often rants about how he is stuck with being a sidekick, as well as giving witty comments as Rayman goes through the Fairy Council. In this game, he is voiced by Billy West. Unlike Rayman 2, in which he can appear anywhere in the game which has a Stone of Thought, Murfy leaves at the Heart of the World.

Murfy's purpose remains similar to previous outings in the series, being that he guides the player in the opening level and then departs to allow the player to explore the world alone.