Difference between revisions of "Ninja Henchman"

Ninja Pirates are a type of Robo-Pirate that appear in Rayman 2 and all of its remakes. 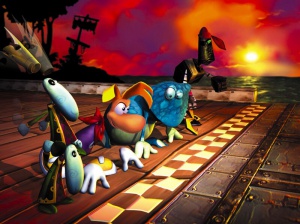 Rayman M promotional picture, with a Ninja Pirate on the right side

Ninja Pirates appeared as a mini-boss two times in the original version of Rayman 2, one in the Precipice and another in the Prison Ship. They use a flame-thrower or the purple Robo-Pirate bullets. They are more dangerous and clever than all the other Robo-Pirates and strike like phantoms, making each one a master of stealth who can't be seen with the naked eye until they are right in front of (or behind) Rayman.

In Rayman 2: Revolution they are referred as the Generator Guardians of the two generators of the Pirate Factory and have unlimited heath. They fire the same bullets as the Green Robo-Pirates, but they are more accurate and faster. These pirates wear a red bandanna, have a black torso, have a cylinder for a head, a white eye and an eye patch.

In the PlayStation version, they appeared four times as mini-bosses in the Precipice, the Tomb of the Ancients, and Gloomy Island. Rayman also fights their leader, Ninjaws, in the Sanctuary of Stone and Fire.

The interesting thing in their appearance is that their hands have textures of tighted fists, although they have hook in left hand, growing up from the fingers, and they can shoot with the flames from their right hands, like normal henchmens - although it looks like they're shooting from their fingers.