Ninja Henchmen, also known as Ninja Pirates, are a type of Robo-Pirate that appears in Rayman 2 and its remakes.

Ninja Henchmen appear to be part of their own elite squadron in the Robo-Pirate army, the low number encountered in the duration of the game suggests that they are only deployed for more special missions. They are amongst the most formidable Robo-Pirates that Rayman will encounter, with many techniques at their disposal.

Physically, they share a similar body structure to that of the Henchman 800, however, their individual body parts differ in shape and design. Unlike the Henchman 800, Ninja Henchmen appear to have hands clasped into fists, they hold a golden hook on their right hand, and can fire various projectiles with their left. Their legs are thicker than a Henchman 800's, and are decorated with golden patterns. In terms of dress, Ninja Henchmen wear a red bandana, a patch on their right eye, a tight black clothing, a great belt strap and black shoes with gold square buckle. Their visible eye is coloured white in-game, but promotional artwork from Rayman M has it coloured green akin to the green eye seen on many Henchman 800 models.

Ninja Henchmen only make two appearances in the original version of Rayman 2, both as mini-bosses.

The first one is encountered at the end of the Precipice, in a Robo-Pirate establishment with a docked warship. In order to be able to unlock a door to reach the exit Spiral Door, this Ninja Henchman must be defeated. It will attack Rayman by firing large conical projectiles akin to those fired by some models of Henchman 800, it will also swipe at Rayman with its hook should he be within range. A good technique to quickly defeat this Ninja Henchman is to have the docked warship shoot at the Ninja Henchman accidentally as it attempts to shoot at Rayman.

Ninja Henchmen feature more prominently in this version of the game, where it is revealed that they are their own unique squad within the Robo-Pirate army. Their leader is also revealed to be Ninjaws, who will personally fight Rayman as the boss of the Sanctuary of Stone and Fire, to prevent him from gaining possession of the second mask of Polokus. Another three Ninja Henchmen make appearances as mini-bosses in the Precipice, the Tomb of the Ancients, and Gloomy Island.

Ninjaws and the Ninja Henchmen in this game all employ the same technique, they will disappear and reappear after every attack. Their main tactic is to try and appear close to Rayman and hit him with their hooks, dodging this attack successfully is vital, as it is revealed by Umber that their hooks are heavy. It is due to this heaviness that the Ninja Henchman will momentarily struggle to lift their hooks, should Rayman dodge them, and thus, give him an opening to retaliate. In addition to this attack, they will also periodically fire yellow energy projectiles at Rayman. When sufficiently damaged, they will disappear and reappear in a circular pattern, firing a projectile each time they reappear, before returning to attacking with their hooks.

In Rayman Revolution, Ninja Henchmen are referred as the Generator Guardians of the two generators of the Pirate Factory and can be seen standing on either side of Admiral Razorbeard's chair in the Prison Ship cutscenes. They have unlimited heath, as it is not necessary to defeat them in order to destroy the generators; however, it can be done by shooting them as they stand near a pool of lava, causing them to fall in. They fire the same bullets as the green Henchmen 800s, but they are more accurate and faster. Once Rayman destroys the generators, he can enter the Pirate Factory. After he has destroyed them, these two Ninja Henchmen are absent in the next Razorbeard cutscene, regardless of whether Rayman actually destroys them or not.

Notably, their hands look like fists, although they have hook in right hand, growing up from the fingers, and they can shoot with the flames from their left hands, like normal Henchmen, although it appears that they are shooting from their fingers. 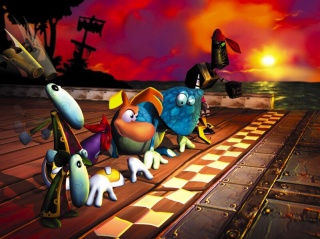 Rayman M promotional artwork, with a Ninja Henchman on the right side.

Promotional artwork for this game shows that a Ninja Henchman was an intended character to feature, but, much like Ly, it was scrapped at some stage and does not feature in the final product.