A previous name for this world, eventually used as the name of one of its levels in Rayman Legends.

Olympus Maximus is the second-last world of Rayman Legends and the second world in Rayman Adventures. It is a world inspired by mythology and paganism, mainly those of Ancient Greece. It features four different themes, which in Rayman Adventures are named: "Palace Ruins", "Islands in the Sky", "Minotaur's Maze" and "Fiery Depths". The main enemies are the minotaurs, who appear in all of these environments.

Levels with this theme appear to take place on top of Mount Olympus. For this reason, the theme is also called "Greece Olympus". This is a place at high altitude where everything is made of white marble. Despite this, the growth of vegetation seems uninhibited. There is grass to be seen on most of the platforms, and also trees as scenery elements. Some small trees can uproot themselves and move from one place to another, where they replant themselves. Apart from the mountains and the marble structures, there is a very calm sea to be seen. This sea, like the sky, is a very bright blue colour, which parodies the stereotypes of Greek summer weather. At first, there are only some white cumulus clouds in the sky, but in certain places the atmosphere becomes darker and more tempestuous, with many grey clouds that obscure the light. Apart from the marble platforms, there are floating shields with faces on them. These can serve as platforms, but also to block fireballs launched by minotaurs.

This environment makes many different references to paganism. The most obvious are the pillars and dilapidated marble structures which resemble the ancient temples that exist in Greece today, for example the Parthenon. There are also statues of some members of Globox's species, as if they were mythological heroes. The marble doors that link the different sections of the levels have a symbol above them of an eye in a triangle, a reference to Egyptian mythology. There are constellations in the sky, of a flying pig and a member of Globox's species playing the lyre. These constellations reference astrology. Small minotaurs, who reference the mythical creature, appear in this environment. In the stormy section of the Rayman Legends level Shields Up... and Down, a white hand comes down from the sky and launches bolts of lightning onto the heroes. This is a reference to Zeus, the king of the Olympians in Greek mythology, who could throw thunderbolts.

According to the description of Princess Olympia, she and her twin sister Sibylla were born here. 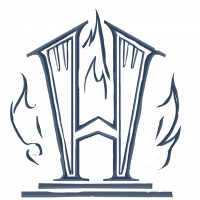 In this world, stylised "H"s are regularly seen engraved on the walls or on buzzsaws. They may reference Hades.

One of the most important environments of this world is that of the labyrinth. These labyrinths are vast closed structures constructed in grey stone. On the walls, complicated diagrams appear, or sometimes symbols, such as a stylised "H", which resembles a gate of Hell and probably references Hades. These structures and diagrams on the walls probably reference the labyrinths of ancient mythology, most notably that constructed on Crete by Daedalus to imprison the Minotaur (the creature which inspired the main enemies of this world). Sometimes, huge floating stone cubes appear as elements of the scenery. In the Rayman Legends level Hell Breaks Loose, we learn that dragons live among these floating cubes. These dragons might reference oriental mythology.

The walls are often covered with spikes, and numerous buzzsaws appear on the paths through the labyrinths, which makes these sections resemble somewhat the factories of the Moody Clouds of Rayman Origins. Little turrets appear on the walls, which shoot flaming swords which follow the heroes (like the missiles shot by the Hunters or the turrets of the Moody Clouds and 20,000 Lums under the Sea). To progress in these sections, the heroes must use their power to run on the walls quite often. Another detail of this environment, which is quite strange, is the fact that drums sometimes appear, which bounce the heroes when they jump on them. Some sections invert the screen, which increases the difficulty of the puzzles.

The Amazing Maze is a particularly complicated puzzle which takes place in this environment.

One of the other important places of this world is the Fiery Depths, also known as "Greece Hades", the Greek Underworld. Contrarily to the well-ordered labyrinths, this is a chaotic abyss. However, there are some similarities between these environments (such as the necessity to use the power to run on walls) and the heroes pass from one to the other quite frequently in Rayman Legends. Even though this section is a metaphor for the Greek Underworld, one sees many details drawn from Christian ideas of "Hell", where the most serious sinners are punished. The pits of lava, out of which come jets and huge flames, seem reminiscent of the "lake of fire" mentioned in the Bible. Also, from time to time, devilbobs are seen, invoking notions of devils or demons. Apart from that, the environment mainly consists of jagged stone cliffs, sometimes with cascades of lava or burning fissures on them. The rock from which the cliffs are made seems to be a purple colour, but it is probably grey like the rock in the labyrinths, tinted by the red light from the fire and lava. There are doors carved into the cliffs to link the different sections of the levels. These doors are in the form of a triangle. This surely references Greek alchemy, because a triangle of this type is the symbol of the element of fire, which is found in many places in this environment. As on Mount Olympus, some statues of members of Globox's species appear, as well as some of Teensies. These statues seem to portray soldiers, and are mostly found just outside secret doors.

As in the labyrinths, there are sometimes spikes on the walls, and drums to bounce the heroes. The Great Lava Pursuit contains shields like those on Mount Olympus, which again serve to block fireballs, as well as jets of lava. Apart from devilbobs, the main enemies are minotaurs and, only in Rayman Legends, hordes of dark creatures, of which the heroes can sometimes be rid using fireworks mushrooms. Otherwise these creatures must be avoided at all costs.

There are also temples in some parts of the Underworld. In contrast to the dilapidated temples of "Palace Ruins", these temples are vast and well maintained, by the small minotaurs. The marble floors are polished and ornate pillars of different sizes are to be seen. Most of these places are dark, but there seem to be a few windows, because the end of the level Swarmed and Dangerous is well lit. Apart from the pillars, statues of heroes of Globox's species are seen once again. This environment again references the temples built in Ancient Greece, for example the Parthenon. A Champibumper appears at the end of Dragon Slayer, the last Olympus Maximus level in Rayman Legends, which propels the heroes onto a pillar in the middle of a pit of lava. This pillar is surrounded by other temples, which collapse into the abyss. These temples have symbols of skulls in triangles on them.

The Islands in the Sky theme is very similar to the Palace Ruins theme, although the levels take place in the sky and usually involve the player having to fly through the majority of the level. This theme is used in many levels in Rayman Adventures, but in Rayman Legends is used only briefly during the final boss fight.

The heroes begin their journey at the foothills of Mount Olympus, which has been invaded by minotaurs. They progress by climbing the mountain, and coming some time later to a stormy area, where the hand of Zeus tries several times to electrocute them. However, with the help of Murfy, they can use a shield to avoid the bolts of lightning. They then enter into the abyss, where the dark creatures reside, and are chased by hordes of them. These creatures hunt them into the labyrinths, where they must avoid traps and solve some puzzles.

After that, the heroes continue on their way in the abyss, where they find the local Dark Teensie, who is mistreating a Teensie princess. The heroes must chase these Teensies, with the help of Murfy, who again moves shields for them. After succeeding in liberating the Teensie princess, they enter into another section of the Underworld and are once again pursued by dark creatures. This time the pursuit leads them into a temple, and after getting out of it they find themselves in another labyrinth.

In this labyrinth, the heroes again meet the Dark Teensie, who is oiling the wings of his flying contraption. When he sees them, he calls some dragons from the depths of the labyrinths, who come and chase the heroes, and escapes from the place. The heroes must avoid the dragons by running on the floors, the walls and the ceilings of the labyrinth, before using a Champibumper to return to the Underworld, where Murfy helps them use jets of lava to kill their pursuers.

This world culminates in a long battle against a floating horde of dark creatures. This begins in the abyss, but the creatures and the heroes use air currents to get back up onto Mount Olympus, where the battle ends definitively. Once the cloud is defeated, the heroes can walk about peacefully on the mountain, where a large amount of Lums is poured on top of them as a reward for saving the world. Then they find the Dark Teensie, who has also somehow escaped from the abyss. He tries to flee but gets stuck between two pillars. The heroes can then send him to the moon.

The musical level Dragon Slayer features a parody of the song Antisocial by Trust, and has sections which take place in the abyss and in the labyrinths, with Champibumpers linking them. At the end of the level, the heroes can see that the temples of the abyss are collapsing after the defeat of the nightmares.

Despite the name of the world, only two levels have sections taking place in "Greece Olympus" theme; these are the first, Shields Up... and Down, and the boss level, A Cloud of Darkness!. Conversely, all the levels of this world consist of sections featuring the "Fiery Depths" theme, apart from Shields Up... and Down and the Amazing Maze.

The levels are, in order:

Olympus Maximus is the second world in Rayman Adventures. It is unlocked once the Sacred Tree grows to at least 210 meters high. The dark creatures are absent.