Difference between revisions of "Picture City"

This is the world of images, and also the world of mirages: passing across the stage of a small theatre, Rayman can find on his path beings straight from a pirate or a science fiction film. In particular, he meets Mama, an impressive shrew armed with a bizarre rolling pin... 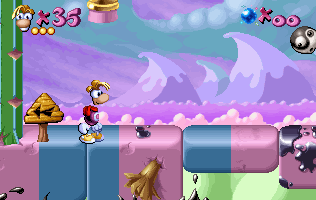 Picture City is the fourth world in the original Rayman game. It consists of a land mainly made up of drawing materials, but Rayman will still find himself twice on the stage of a theatre. As he makes progress among erasers, tables, pencils, yin-yangs, writing chalks and pens, he has to jump onto pencil sharpeners, dodging the drawing pins that stand in his way. Danger is omnipresent, as shown by the ink-covered erasers placed above the void, on which slipping down is irremediably followed by a deadly fall. Rayman must also pass over an ink sea as soon as he arrives, and he will find ink pots and paint buckets as he moves forward. In the Rayman Junior games, boxes full of ink, gouache tubes and palettes are part of this scenery. Rayman will also find hisSuper Helicopter power, which will help him to pass through this strange world. 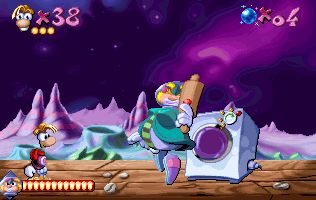 The enemies in Picture City are antitoons, hunters, and pirates. The boss is Space Mama, a large woman with blonde hair. Rayman will fight her first in Eraser Plains, and the final battle will take place in Space Mama's Crater.

Once Rayman has beaten her, Mr Dark captures Betilla the Fairy.

At one point, members of Ubisoft were considering the option of having Rayman return to Picture City, along with other Rayman 1 locations, during his fourth outing. Some concept artwork was produced, depicting Picture City as it would appear in a 3D game. However, Rayman 4 was ultimately cancelled. 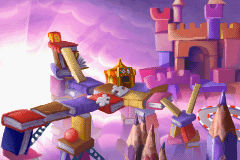 The Child world from the GBA version of Rayman Raving Rabbids

In the Game Boy Advance version of Rayman Raving Rabbids, which was based on the cancelled Rayman 4 prototype, a land known as the Child world appears. The Child world appears to be a combination of Picture City and the Toy world, two lands which were planned to appear in Rayman 4.