A piranha is a type of flesh-eating fish that lurks in the murky waters of Rayman's world. They can be found in all three major Rayman platformers, with a different behaviour though. 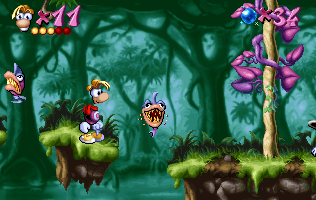 A piranha hit by Rayman's fist

In the original Rayman, they are found only in Dream Forest, and fly up from the water with their helicopter caudal fin. If Rayman touches them he loses a hit point, and if he's unlucky, he could be pushed into the water and lose a life. Rayman can defend himself from piranhas by punching or shooting them, which shatters their sharp teeth and then defeats them. A single punch can get rid of them. 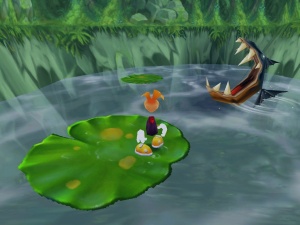 A piranha trying to attack in Rayman 2 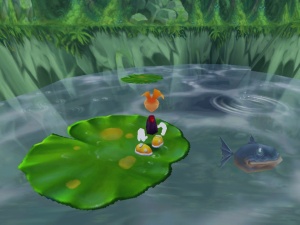 A piranha swimming in Rayman 2

In Rayman 2, they are found in any body of water that Rayman cannot swim in, usually polluted or stagnated water, or even acid. Two major kinds of piranhas live in those places: the small ones that devour Rayman when he falls into water, and the bigger ones that jump from water and try to bite him. A single energy ball can get rid of the second kind. 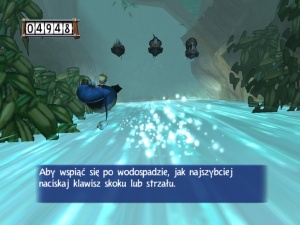 Mechanical piranhas from the Clearleaf Forest. 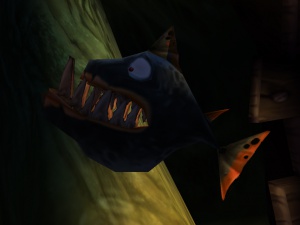 Piranhas in the Bog of Murk from Rayman 3.

They are also present in all versions of Rayman 3, mainly in the Bog of Murk, but while Rayman can actually swim in the dirty waters they live in, they will deplete his energy very quickly and cause a game over. We can meet a "jumping" version too, in the Bog of Murk, where they often jump over logs Rayman has to walk across. But there are also special (mechanical?) version in the Clearleaf Forest, in the phase where Globox ascends the waterfall. Oddly, they can jump from the waterfall's water in contradiction with physics laws.

Piranhas are also found in the GBA version of Rayman 3 in Forgotten Forests, jumping out of the water in the same manner as those in Rayman 2. They can also be hit and killed in one blow, smashing their teeth as well. 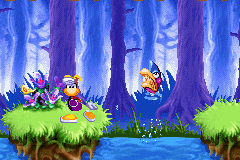 A piranha, as seen in the Game Boy Advance version of Rayman Raving Rabbids

In Rayman Raving Rabbids (GBA), they appear in the forest levels, looking identical to the ones in the first game. The Rayman 3 variations also appear in Rayman: Hoodlums' Revenge.